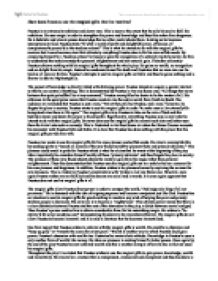 How does Faustus use the magical gifts that he receives?

How does Faustus use the magical gifts that he receives? Faustus is an extremely ambitious and clever man. This is seen to the extent that he sells his soul to fulfil his ambitions. He uses magic in order to strengthen his power and knowledge and thus this makes him dangerous. He is hubristic and aims to posses knowledge that no other mortal should have. In doing so he becomes synonymous to God. Faustus states "O what a world of profit and delight/Of power, of honour, of omnipotence/Is promis'd to the studious artisan!" This is what he intends to do with the magical gifts he receives but it soon becomes clear that ultimately everything Faustus does is for his own selfish needs. By comparing himself to a 'studious artisan' he hopes to gain the recognition of a scholarly work however, he fails to understand that scholars study for personal enlightenment and not material gain. Therefore ultimately Faustus achieves nothing with his magical gifts throughout the whole play. He gains no wealth, no recognition and no delight from his magic. ...read more.

Significantly, everything Faustus says is only what he intends to do with the magical gifts. He never does use the magical gifts to commit such acts and rather uses them for trivial acts such as comedy. This is illustrated in Act four Scene six when the Horse-Courser recounts his encounter with Faustus d**k and Robin. It is clear that Faustus has done nothing with the power that his magical gifts provide him with. Faustus also wants to use his magical gifts for his own pleasure and selfish needs. He aims to accomplish this by sending spirits to "search all corners of the new-found world/For pleasant fruits and princely delicates." This pleasure could result in pride for Faustus which is what he claims that he wants at the beginning of the play. More importantly he considers himself worthy of these 'princely delicates' and thus forgets his place in society. The pleasure of these new found objects shows the material gain from his magic rather than personal enlightenment. Thus this demonstrates that Faustus uses his magical gifts not as a scholar but as a sorcerer for his own pleasure and happiness. ...read more.

One final aspect that Faustus wishes to achieve with the magical gifts is wealth. He could be a physician and "heap up gold," or "ransack the ocean for orient pearl." Wealth is another way in which Faustus could gain power. Faustus's obsession with wealth also illustrates his materialistic attitude. Knowledge in Faustus's eyes is only another form of wealth like money. He takes no pleasure in making himself a better person. Once again by the end of the play Faustus has not achieved wealth and this is another example of how he has in fact not used his magical gifts. Throughout the play it is evident that Faustus wishes to use the magical gifts to gain power, knowledge, wealth and immortality. He aims to be a creature that is omnipresent, omniscient and omnipotent and thus his desire is to be god. He becomes obsessed with using his magical gifts to achieve this and continually speaks about all his ideas. However, his dreams never become a reality as he never attempts to actually pursue his desires and use the magical gifts. Instead Faustus uses his magical gifts merely as a comedic tool therefore demonstrating the weakness of his character. ...read more.