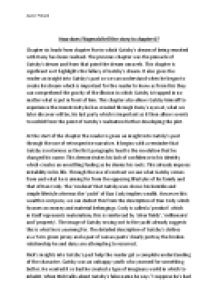 How does Fitzgerald tell the story of the Great Gatsby in chapter 6?

﻿Aaron Pickard How does Fitzgerald tell the story in chapter 6? Chapter six leads from chapter five in which Gatsby's dream of being reunited with Daisy has been realised. The previous chapter was the pinnacle of Gatsby's dream and from that point the dream unravels. This chapter is significant as it highlights the fallacy of Gatsby's dream. It also gives the reader an insight into Gatsby's past so we can understand when he began to create his dream which is important for the reader to know as from this they can comprehend the gravity of the illusion in which Gatsby is trapped in no matter what is put in front of him. This chapter also allows Gatsby himself to experience the monstrosity he has created through Daisy's eyes at, what we later discover will be, his last party which is important as it then allows events to unfold from the point of Gatsby's realisation further developing the plot. ...read more.

The image of Gatsby rowing out to the yacht already suggests this is what he is yearning for. The detailed description of Gatsby's clothes as a 'torn green jersey and a pair of canvas pants' clearly portray the broken relationship he and daisy are attempting to resurrect. Nick's insights into Gatsby's past help the reader get a complete understanding of the character. Gatsby was an unhappy youth who yearned for something better. He wanted it so bad he created a type of imaginary world in which to inhabit. When Nick talks about Gatsby's false name he says "I suppose he's had that name for a long time, even then". Gatsby has spent much of his life with the image of something better planted firmly in his mind. And when Dan Cody takes him under his wing he gets a glimpse into that world and believes that he can one day attain it, that he can one day be a part of it. ...read more.

Gatsby feels sad because Daisy didn't have a good time, but his sadness goes deeper than that. What really upsets him is that he can't turn back time. "I wouldn't ask too much of her," Nick says. "You can't repeat the past." "Can't repeat the past?" Gatsby cries out in desperation. "Why of course you can!" What Gatsby wants is to obliterate the five years since he last saw Daisy. He wants life to be as wonderful and as beautiful as he believed it could be. Like all of us, he wants to ignore the fact that life is a process of change, and that time never stands still. If only Daisy would tell Tom, "I never loved you!" If only he could take Daisy back to Louisville, marry her, and begin their lives together as though there had been no Tom, no daughter. He must win her to satisfy his own Platonic image of himself, the ideal self which he associates with his love for Daisy in Louisville in the autumn of 1917. ...read more.