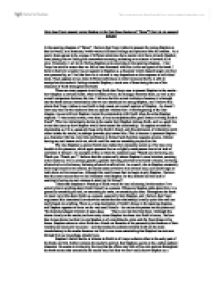 How does Frayn present young Stephen in the first three chapters of &quot;Spies&quot;? How do we respond to him?

How does Frayn present young Stephen in the first three chapters of "Spies"? How do we respond to him? In the opening chapters of "Spies", I believe that Frayn wished to present the young Stephen so that he would, as a character, evoke various different feelings and opinions from his readers. As a result, there appear to be a range of different emotions that a reader could have towards Stephen; from pitying him to finding him somewhat annoying, endearing or a mixture of several all at once. Personally, I am led to finding Stephen quite annoying in the opening chapters - I feel Frayn has tried to ensure that we feel at least frustrated with him in the early part of the book. I believe that how a reader was to respond to Stephen as a character would depend largely on their own personality, as I feel that how he is viewed is very dependant on the response to individual traits. Frayn appears to use many different techniques in order to ensure that he is able to manipulate the reader's feelings towards Stephen, a main one of these being the use of the character of Keith throughout the book. There are many aspects involving Keith that Frayn uses to present Stephen to the reader - how Stephen is towards Keith, what he thinks of him, the dialogue between them, as well as the overall comparison between the two. ...read more.

We are told that he has "a too-short" grey shirt and "too long" grey shorts, that he wears "grubby" tennis shoes, one of his socks has slipped down, and his laces are undone, immediately presenting him as a rather pitiful sight. Throughout this passage in the book, Frayn slips in words that are perhaps supposed to represent Stephen overall - words such as "inadequate", "plain", "hopeless", and "failed". Whilst one of these words might perhaps have served well in the description, using several of them in a short space subconsciously gives the reader an impression of perhaps how they should be viewing Stephen, or perhaps how everyone else views him. As if this was not effective enough alone, Frayn then presents the reader with a standard by which to compare him; a description of Keith. Frayn cleverly uses the same aspects of Keith's appearance to describe as he did Stephen's, showing the reader that it is an intentional comparison that we should take notice of. Here, we are told that Keith is wearing the same clothes, and that there is where the similarities end. Frayn proceeds to tell us that Keith is smartly and correctly dressed, with his grey socks "neatly pulled up" and his sandals "neatly buckled". Using physical description as a comparison between the boys is an effective technique because it means the reader is able to visually compare them and means that the comparison can be all the more vivid. ...read more.

For example, when talking about the possibility of Mrs Elmsley being a German spy, he says "It had never occurred to me why she had a moustache and a wart in the middle of her forehead". This cartoon-like view that all villains and bad people must be ugly, and that a wart automatically makes you a bad person, is very stereotypical and reminds us that Stephen is still a child. It also makes him seem very comical as we are able to laugh at him for these sorts of statements, which present him as a much more favourable person and character, which I believe is what Frayn wished to achieve by having the narration written in this way. Overall, I believe the techniques that Frayn use to present Stephen to the reader are effective in creating a strong opinion of him from the opening chapter, and are especially effective in creating a character that could be seen differently by every individual reader, enabling them to have a strong person opinion. I do not believe that there would be one shared opinion because the character traits that Frayn shows Stephen to have would cause different responses from different personalities, because almost every aspect of his character I have included in this essay could be responded to in a number of different ways. I believe that Frayn wishes our opinion of Stephen to change throughout the book, and that these chapters are important for creating the initial opinion of him. ?? ?? ?? ?? ...read more.