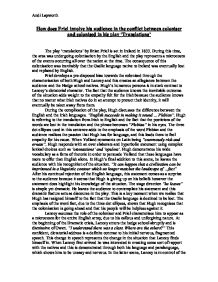 How does Friel involve his audience in the conflict between coloniser and colonised in his play 'Translations' The play 'translations' by Brian Friel is set in Ireland in 1833. During this time, the area was undergoing colonisation by the English and the play represents a microcosm of the events occurring all over the nation at the time. The consequence of this colonisation was inevitably that the Gaelic language native to Ireland was eventually lost and replaced by English. Friel develops a pre-disposed bias towards the colonised through the characterisation of both Hugh and Lancey and this creates an allegiance between the audience and the Hedge school natives. Hugh's humerous persona is in stark contrast to Lancey's dictatorial character. The fact that the audience knows the inevitable outcome of the situation adds weight to the empathy felt for the Irish because the audience knows that no matter what Irish natives do in an attempt to protect their identity, it will eventually be taken away from them. ...read more.

The stage direction "he leaves" is simple yet dramatic. He leaves the audience to contemplate his statement and this dramatic feature acts as discourse in the play. This is a key moment when we realise that Hugh has resigned himself to the fact that the Gaelic language is destined to be lost. The emphasis of the word fact, due to the three dot ellipses, shows that Hugh recognises that the colonisation is going ahead and that his people will be helpless against it. Lancey assumes the role of the coloniser and Friel characterises him to appear as a microcosm for the entire English army, due to his callous and unforgiving nature. At the beginning of the Dramatic crisis, Lancey enters the hedge school abruptly and is dismissive of Owen. "I understand there was a class. Where are the others?" This confident, dictatorial address is a definite contrast to his initial nervous, fragmented speech. This change in speech represents the change in the situation that Lancey finds himself in. ...read more.

The dictatorial persona taken on by Lancey further enforces the audience's sympathy for the Irish people. It is clear from Lancey's dismissive attitude that he has no time for the Irish language and that Hugh's prediction is beginning to prove accurate. The 'fact' that the English cannot be dispelled indicates that along with the new place names, a new language will also be enforced. Friel involves the audience in the struggle between coloniser and colonised by forcing them to choose which side they feel most empathetic with. It is clear that Friel has created the character of Lancey to be utterly repulsive and the audience responds to this by disliking him and his cause. On the other hand, Friel has created humerous, likeable characters in the Hedge school that the audience can relate to and this creates an understanding between the characters and the audience. Because the play is written in English, it is accessible by both the colonisers and the colonised and this will therefore evoke a reaction of some sort from every person who reads it. Andi Lapworth ...read more.