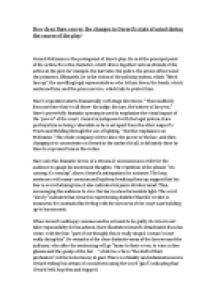 How does Hare convey the changes in Gerard McKinnon 's state of mind during the course of the play?

﻿How does Hare convey the changes in Gerard?s state of mind during the course of the play? Gerard McKinnon is the protagonist of Hare?s play. He is at the principal point of the action. He is the character, which draws together various strands of the action in the plot, for example, the barrister, the police, the prison officers and the prisoners. Ultimately, he is the victim of the policing system, which ?fitted him up?, the unwilling legal representatives who let him down, the bench, which sentenced him, and the prison service, which fails to protect him. Hare?s exposition starts dramatically with stage directions. ? Then suddenly from nowhere they?re all there- the judge, the jury, the battery of lawyers.? Hare?s powerfully dramatic opening is used to emphasise the visual impact of the ?power? of the court. Gerard is juxtaposed with the legal system. Hare portrays him as being vulnerable as he is set apart from the other suspect?s Travis and Fielding through the use of lighting. ...read more.

Here, Hare through the use of juxtaposition, illustrates Gerard?s discontent towards the judiciary. Moreover, Hare draws a divided society comparison of ?us versus them?. The lawyers and the judiciary represent the wealth and elite, whilst Gerard represents the lowest of the social heap. Hare, uses the character Irina to give the audiences glimpses of Gerard in jail, the audience witness Gerard?s decline and despair. When Irina first visits him, Gerard, is wary of receiving a lawyers help, given that he has been let down by the legal profession before, as Sir Peter his solicitor never came back to visit him. He bluntly states that he wishes he gave him a pen for his help with, ? Don?t jerk me off I?ve already come,? written on it. The crude lexical choice of the word Gerard uses, shows his complete lack of faith of lawyers and the judiciary system. However, as the conversation progresses, Gerard begins to trust Irina. ...read more.

Irina states that his sentence has been reduced, however, Gerard seems indifferent to the news she brings him, this reduction is not enough to save him from the brutality and crime that happens in jail. Their conversation lacks the intimacy of their earlier encounter; Gerard uses abrupt short dismissive sentences, ?Thank you then. Thank very much.? To indicate that there is no need to carry on with the conversation, as all hope is gone. Towards the later part of the scene, Gerard expresses interest in read Irish books now. ?When I was brought up, it was always a background. But I laughed it off?I?m not laughing now.? Hare leaves us with an impression that Gerard?s newly aroused interest in Irish history indicates a spark of defiance, an increased awareness that in this world it is a case of ?them and us.? There is finality to the words ?Goodbye, Irina.? Which Gerard uses to end the scene ,he acknowledges that Irina will probably not see him again as the court case is adjourned and that he must face his life in isolation as a victim of marginalisation. ...read more.