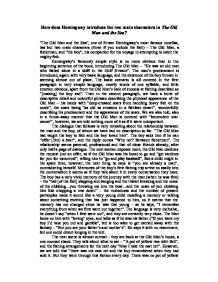 How does Hemingway introduce the two main characters in The Old Man and the Sea?

How does Hemingway introduce the two main characters in The Old Man and the Sea? "The Old Man and the Sea", one of Ernest Hemingway's most famous novellas, has but two main characters (three if you include the fish) - The Old Man, a fisherman, and "the boy", his companion for his voyage in attempting to catch the mighty fish. Hemingway's famously simple style is no more obvious than in the beginning sentence of the book, introducing The Old Man - "He was an old man who fished alone in a skiff in the Gulf Stream". The man's predicament is introduced, again, with very basic language, and the existence of the boy thrown in seeming almost out of place. The basic scenario is all covered in the first paragraph in very simple language, mostly words of one syllable, and little emotion obvious, apart from the Old Man's lack of success at fishing described as "[making] the boy sad". Then in the second paragraph, we have a burst of descriptive detail and colourful phrases describing the physical appearance of the Old Man - his hands with "deep-creased scars ...read more.

present participles make it sound like a very young child recalling a memory or talking about something exciting that has just happened to him, so it seems that the memory has not changed since he was that young - as he says, "I remember everything from when we first went out together". The language is very inclusive, he doesn't say "when I first went out", and they are certainly very close. The Man looks on him with "loving" eyes, and talks as if he was his father ("If you were my boy I'd take you out and gamble", but is too wise to get carried away with the fantasy - "But you are your father's and mother's". He says it with no resentment, but one could detect longing in the text. The next scene is almost surreal - they are back at the Old Man's house, a one-roomed shack. They talk about what to eat - "A pot of yellow rice with fish", and the fishing arrangements for the next day "May I take the cast net". ...read more.

Then, as quickly as the roles were reversed, they are reset, as the boy asks "Tell me about the baseball", and the Old Man is now like a grandfather relating stories of his youth to a child on his knee. Their conversation about baseball leads to the boy asking "Who is the greatest manager, really, Luque or Mike Gonzalez", the old man saying he thinks them equal, and then suddenly the boy, as a very young child might, says "And the best fisherman is you". Like conversation with a very young child, the topic completely changes, and he comes up with this childish sentence, and the rest of the conversation is from a father to a son, including the old man saying "I'll wake you up in the morning" Although we have had no physical description of the boy at all, not even his name, we feel we know him, due to Hemingway's skill with intimate dialogue, and we can see the very odd relationship that the boy and the Old Man hold - sometimes that of a father/son relationship, then business partners as fishers, and the boy caring for the old man. The mood can change in an instant, and it is compelling reading ...read more.