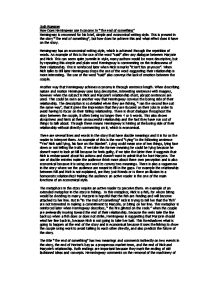 How Does Hemingway use Economy In

Josh Ruegger How Does Hemingway use Economy In "The end of something" Hemingway is renowned for his brief, simple and economical writing style. This is present in the story "The end of something", but how does he achieve this and what effect does it have on the story. Hemingway has an economical writing style, which is achieved through the repetition of words. An example of this is the use of the word "said" after any dialogue between Marjorie and Nick. This can seem quite juvenile in style, many authors would be more descriptive, but by repeating this simple and plain word Hemingway is commenting on the tediousness of their relationship. This is reinforced later when Nick remarks "it isn't fun anymore". When Nick talks to Bill later Hemingway drops the use of the word suggesting their relationship is more interesting. The use of the word "said" also conveys the lack of emotion between the couple. Another way that Hemingway achieves economy is through sentence length. ...read more.

There is also a vagueness in the story where we the audience are meant to fill in the gaps. For example the relationship between Bill and Nick is not explained, are they just friends or is there an illusion to a homoerotic relationship? Making the audience an active reader is the one of the main functions of an economical style. The metaphors in the story require an active reader to perceive them. An example of an extended metaphor in the story is fishing. In this metaphor, Nick is a fish, for whom biting would be deciding to marry. Marjorie is hopeful that the fish are feeding and will become attached to her line. But in "in The End of Something" nick is trying to tell her that the 'fish' are not interested in making a commitment to Marjorie, or biting on her line. This metaphor is reinforced later when Hemingway describes, " the fire glinted on the reels." ...read more.

Nick's actions in the story displays the characteristics of young men at this time becoming more restless and showing signs of not wanting to settle down with their first partner. In this way Hemingway has used an economical title and themes in the story not just to comment on the actions in Horton's Bay but the whole of America at that time and because of this he has used Horton's Bay as a microcosm for the change in society. To conclude, Hemingway uses economy cleverly in the story "in The End of Something". He manages to comment and allude to a lot without having to spell it out to the reader; in fact the subtle style increases the readers role in interpreting the story. He uses economical techniques such as metaphor and sentence length to suggests the doom of their relationship, and he foreshadows their break-up with the description of the town. He also manages to use economy to comment on America as a whole, and uses the people and setting of the story as a microcosm of society of post first world war USA. ...read more.