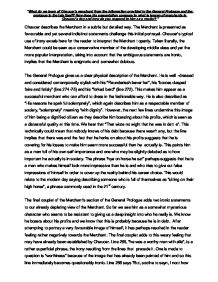 How does his presentation compare to what is known of merchants in Chaucer's day and how do you respond to him as a reader?

"What do we learn of Chaucer's merchant from the information provided in the General Prologue and the prologue to the tale itself? How does his presentation compare to what is known of merchants in Chaucer's day and how do you respond to him as a reader?" Chaucer describes the Merchant in a subtle but detailed way. The Merchant is presented as favourable and yet several indistinct statements challenge this initial portrayal. Chaucer's typical use of irony excels here for the reader to interpret the Merchant openly. Taken literally, the Merchant could be seen as a conservative member of the developing middle class and yet the more popular interpretation, taking into account that the ambiguous statements are ironic, implies that the Merchant is enigmatic and somewhat dubious. The General Prologue gives us a clear physical description of the Merchant. He is well-dressed and considered contemporarily stylish with his "Flaunderissh bever hat", his "bootes clasped faire and fetisly" (line 274-75) and his "forked berd" (line 272). This makes him appear as a successful merchant who can afford to dress in the fashionable way. ...read more.

This would relate to the modern day saying describing someone who is full of themselves as "sitting on their high horse", a phrase commonly used in the 21st century. The final couplet of the Merchant's section of the General Prologue adds two ironic statements to our already depleting view of the Merchant. So far we see him as a somewhat mysterious character who seems to be resistant to giving us a deep insight into who he really is. We know he boasts about his profits and we know that this is probably because he is in debt. After attempting to portray a very favourable image of himself, it has perhaps resulted in the reader feeling rather negatively towards the Merchant. The final couplet adds to this weary feeling that may have already been established by Chaucer. Line 285, "he was a worthy man with alle", is a rather superficial phrase, the irony resulting from the lines that precede it. One is made to question is "worthiness" because of the image that has already been painted of him and so this line immediately becomes questionably ironic. ...read more.

This may inform the audience that the Merchant's tale will not speak fondly of marriage. The Host suggests that he uses his pain and knowledge to tell a story about marriage. The Merchant agrees but says that he cannot talk anymore about his own marriage. The audience may question whether the Merchant was even married at all or if he was, was it really the wife that ended it all. Obviously it is impossible to tell whether the Merchant is telling the truth or not but the overall portrayal of him certainly causes us to be weary of his honesty as readers, which is probably Chaucer's intention. Overall the Merchant is painted as a rather mysterious character who perhaps is not the best person to trust. He comes across as somewhat secretive in a dodgy kind of way. We do not know much about him, and he seems rathe reluctant to inform us of any detail. This may be because he is too ashamed of it or because he has criminal tendencies. Either way, Chaucer is very distinct in ensuring that the Merchant is protective over his private life. This causes us to question how much we can trust what he says, in the prologue and the tale itself. ...read more.