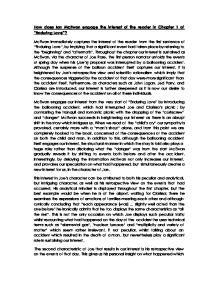 How does Ian McEwan engage the interest of the reader in Chapter 1 of Enduring Love?

How does Ian McEwan engage the interest of the reader in Chapter 1 of "Enduring Love"? McEwan immediately captures the interest of the reader from the first sentence of "Enduring Love", by implying that a significant event had taken place by referring to the "beginning" and "aftermath". Throughout the chapter our interest is sustained as McEwan, via the character of Joe Rose, the first-person narrator unfolds the events of spring day when his (Joe's) proposal was interrupted by a ballooning accident. Although the suspense of the balloon accident itself captures our interest, it is heightened by Joe's retrospective view and scientific rationalism which imply that the consequences triggered by the accident of that day were more significant than the accident itself. Furthermore, as characters such as John Logan, Jed Parry, and Clarissa are introduced, our interest is further deepened as it is now our desire to know the consequences of the accident on all of these individuals. McEwan engages our interest from the very start of "Enduring Love" by introducing the ballooning accident, which had interrupted Joe and Clarissa's picnic; by contrasting the tranquil and romantic picnic with the dropping of the "corkscrew" and "danger" McEwan succeeds in heightening our interest as there is an abrupt shift in the story which intrigues us. ...read more.

waiting for Clarissa; there he examines the expressions of emotions of families meeting each other and although cynically concluding that "each appearance [was] ... slightly well acted than the one before" he ironically admits that he too displays the same characteristics as "all the rest". This is not the only occasion on which Joe displays such peculiar traits; whilst recounting what had happened on the day of the accident he uses technical terms such as "elemental gas", "nuclear furnace" and "multiplicity and variety of matter" which seem rather irrelevant, if not peculiar, whilst talking about an accident which resulted in the death of a man, but nevertheless play a significant role in sustaining our interest. The second characteristic of Joe that results in our interest is his retrospective view on the events of that day. This gives us his personal insight on what happened which are also important in sustaining our interest. This retrospective view gives us new information that plays a sizeable role in not only shaping our reaction to Joe, but also the other characters. ...read more.

Similarly, in the first chapter, Joe, retrospectively also reveals personal information about John Logan, such the fact that he is a doctor, and a family man, with children; this information heightens his character in our mind, and as a result also heightens the effect on us as he dies. To conclude, from the very first sentence of "Enduring Love" McEwan holds us enthralled in his novel, having used several techniques to ensure that our interest is sustained not only through the first chapter, but the whole novel. These include the gradual development of what happened on the day of the accident, Joe's peculiar characteristics, and the introduction of characters such as Clarissa and John Logan - with all of these combined, McEwan makes it inevitable that our interest remains engaged. In my opinion, out of all of these though, the most significant in sustaining our interest is that of Joe's character and retrospective view on the events. Without these we would be unable to form an opinion on other characters, such as Jed and Clarissa, and more importantly the plot would be lacking a lot, we would miss many of his ?? ?? ?? ?? ...read more.