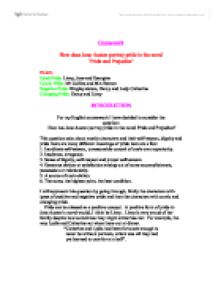 How does Jane Austen portray pride in the novel &amp;#145;Pride and Prejudice&amp;#146;

Coursework How does Jane Austen portray pride in the novel 'Pride and Prejudice' PLAN: Good Pride: Lizzy, Jane and Georgina Comic Pride: Mr Collins and Mrs Bennet Negative Pride: Bingley sisters, Darcy and Lady Catherine Changing Pride: Darcy and Lizzy INTRODUCTION For my English coursework I have decided to consider the question: How has Jane Austen portray pride in the novel Pride and Prejudice? This question asks about mostly characters and their self-respect, dignity and pride there are many different meanings of pride here are a few: 1. Inordinate self-esteem, unreasonable conceit of one's own superiority. 2. Insolence, arrogance. 3. Sense of dignity, self-respect and proper self-esteem. 4. Generous elation or satisfaction arising out of some accomplishment, possession or relationship. 5. A source of such elation. 6. The acme, the highest point, the best condition. I will approach this question by going through, firstly the characters with types of positive and negative pride and then the characters with comic and changing pride. Pride can be classed as a positive concept. A positive form of pride in Jane Austen's novel would, I think be Lizzy. Lizzy is very proud of her family despite how sometimes they might embarrass her. For example, the way Lydia and Catherine act when there out at dinner. "Catherine and Lydia had been fortunate enough to never be without partners, which was all they had yet learned to care for at a ball". This would suggest how flirtatious Lydia and Catherine are. ...read more.

This is what Mr Bennet has learned that Lizzy has accepted Darcys' second proposal. Mr Darcy was determined to not make himself look daft/pathetic again he makes sure that Lizzy is not leading him on before he properly proposes: "I could not have addressed you in any possible way that Would induce you to accept me. So tell me if your feelings Are as they were before". Georgina on the other hand is very proud of her brother and the way she has been brought up. She obviously shows pride in her family and in all she does. I think Georgina looks up to her brother (Darcy) and respects him greatly in all he does. The negative version of pride appears in this novel quite often. A lot of it appears in conversations between the Bingley sisters. The Bingley sisters are some of the most prejudice people throughout this book. They think they are a step above the rest and only have friends with 'money'. They think that all women should be elegant females and learn to play at least one instrument, sew and act lady like (basically to be accomplished). "Women are inclined to learn to play at least one instrument fluently" It shows us this when Lizzy dashes half way across the countryside by foot to visit her sick sister. The greeting she gets is an unimpressed one and they are dicusted in her unladylike exertion. ...read more.

She claims she's always right by, for example when Lydia ran off she said she would never come back she's been kidnapped. When she heard Lydia was coming back married she said she always knew she'd come back. Both these characters are humorous in the novel and the video, but do get quite annoying. Changing Pride also happened only once or twice in this novel. The first person it happens to is Lizzy as her pride changed when she realised she'd thought wrong of Darcy. At first she saw him as rude and arrogant but by the end she saw that she really loved him. She learned to see through all his arrogance and self-centredness and saw the polite and pleasant Darcy. This changed her views on Darcy and gave her reason to accept his proposal second time round. Darcy the mostly changed character. He has fallen for Lizzy and realises he wants to spend the rest of his life with her. At the start or the book Darcy could've been described as arrogant, self-centred/confident man I think Lizzy's influences changed Darcy's pride and he started looking at people for what they were and not what they looked like. She did this by making him realise what's she was like deep down and not what she looked like on the outside or of her family name. The Pride in this novel is what I think keeps the story going, it makes it a lot more exciting to read. All four of these prides mixed in to one and written in the most interesting ways stops you from wanting to put this book down. By Kirsty Price ...read more.