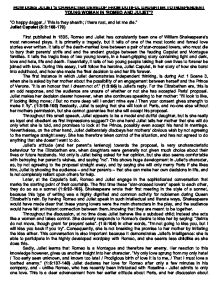 HOW DOES JULIET'S CHARACTER DEVELOP FROM DUTIFUL DAUGHTER TO INDEPENDENT YOUNG WOMAN IN 'ROMEO AND JULIET'?

HOW DOES JULIET'S CHARACTER DEVELOP FROM DUTIFUL DAUGHTER TO INDEPENDENT YOUNG WOMAN IN 'ROMEO AND JULIET'? "O happy dagger, / This is they sheath; / there rust, and let me die." Juliet Capulet (5:3:168-170) First published in 1595, Romeo and Juliet has consistently been one of William Shakespeare's most renowned plays. It is primarily a tragedy, but it tells of one of the most iconic and famed love stories ever written. It tells of the death-marked love between a pair of star-crossed lovers, who must die to bury their parents' strife and end the ancient grudge between the feuding Capulet and Montague families. It tells the tragic lives of two young lovers, in a heart-gripping story containing light and dark, love and hate, life and death. Essentially, it tells of two young people taking their own lives to forever be joined with love. During this essay, I will follow the heroine, Juliet Capulet, in her story of how she burst into adulthood, and how she made the final decision to end her life forever. The first instance in which Juliet demonstrates independent thinking, is during Act 1 Scene 3, when she is asked by her mother about the possibility of an engagement between herself and the Prince of Verona. "It is an honour that I dream not of." (1:3:66) is Juliet's reply. For the Elizabethan era, this is an odd response, and the audience are unsure of whether or not she has accepted Paris' proposal. Juliet makes her decision clearer however, when she continues speaking to her mother: "I'll look to like, if looking liking move; / But no more deep will I endart mine eye / Than your consent gives strength to make it fly". (1:3:98-100) Basically, Juliet is saying that she will look at Paris, and no-one else without her mothers permission, but she cannot guarantee that she will accept his proposal. ...read more.

During the balcony scene, she cautions Romeo, and explains the consequences if he is found there: "If they do see thee, they will murder thee." (2:2:70). While Romeo appears caught up in the moment, Juliet has her head on her shoulders: she knows that Romeo's presence in the Capulet garden is a bad idea. Juliet displays this same maturity and feelings when Romeo is banished to Mantua. She questions whether they will ever meet again: Romeo is certain they will and assures her that "all these woes shall serve / For sweet discourses in our times to come" (3:5:52-53) He's optimistic they will grow old together but Juliet, however, sees things differently. Not only can she not see their happy future, but she also has an (accurate) feeling of how things will end up: "Methinks I see thee, now thou art so low, / As one dead in the bottom of a tomb." (3:5:55-56) These insights into Juliet's thoughts, reveal that she is not allowing her passions to guide her and she certainly understands the direness of the circumstances. Therefore, the audience feel sympathy for her, because she is trying so hard to make the situation better, even though she appears to know that it is doomed. This demonstrates another giant leap in Juliet's quest to becoming an adult, because a child would see things through rose-tinted glasses and would not fully understand the situation: Juliet on the other hand, definitely understands their position, and is doing everything in her power to let them live happily ever after. Regardless of the dangers, nothing stands in Juliet's way once she is committed. She marries Romeo without her parents' knowledge and consent, and she remains consistent in her love to him when he is banished for killing her cousin, Tybalt. Overnight, she has become an adult and assumes a more traditional role of wife: Juliet chooses to support her husband regardless of the consequences. ...read more.

Like the rest of her choices, Juliet's decision to end her life is definitive. Once her mind is made up, there is no talking her out of it. Though the Friar tries to influence her, Juliet will not be persuaded. Her death scene is short. With a "happy dagger" (5:3:169) and very little ceremony, Juliet Capulet takes her own life. This act of death really is the greatest act of independence any young person could take. Juliet Capulet felt the need to commit suicide, as she had no-one: she had been abandoned by her mother, father and nurse, and her husband lay dead next to her. When she woke up and saw his body, she acted very quickly and independently. She made the decision that she thought was best, and although she did, in the end, die, she did so in the name of love. At the end of the day, we have to remember that Juliet Capulet was only thirteen years old. She was still a child. And in the space of only a few days this young girl: fell in love; married illicitly; lost her virginity; experienced the death of a close cousin; was threatened and nearly disowned by both of her parents; was betrayed by the nurse who raised her from infancy; spent nearly two days drugged to unconsciousness; was widowed; and woke up next to her dead husband. That's a lot of things for a young girl to cope with! Whether, as a dutiful daughter, she handled the situations she was put in, well or not, and whether she did fundamentally make the right decisions in the end, I believe that Juliet Capulet, as a young woman, knowingly made the ultimate sacrifice for love, and this act of independence made her believe that she would forever be joined with her true love Romeo. To be honest, I don't blame Juliet for committing suicide! She had already lost everything. I think she had more than a good enough reason to take her life. Don't you? "Doth with their death bury their parents' strife." Prologue, line 8 ...read more.

There are however missing apostrophes and one or two errors which could have been eliminated by careful proof-reading.