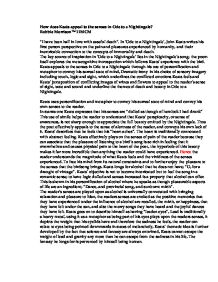 Keats goes on to describe himself as having "leaden eyes", Lead is traditionally a heavy metal, using it as a metaphor as being part of his eyes plays upon the readers senses, it depicts the weight that his eyelids have and therefore the sadness he feels, the reader can relate to eyes being pointed downwards in states of melancholy, Keats' thematic idea is further developed by the fact that science and fantasy are always entwined, Keats cannot escape the weight of lead and gravity any more than he can escape from the sadness in his life, The fantasy he longs for is prevented by himself being human. Dramatic irony is shown by Keats' choice of imagery, which plays on the reader's senses and underlines the conflicted emotions Keats himself feels. Keats' choice of the imagery of "leaden eyes" is interesting. Because lead is a heavy metal, it depicts his sadness and pessimism, however lead in chemistry shares extremely close properties to gold a rare and sought after metal connotated with wealth and pleasure, Keats' choice of lead with its connection to gold is ironic because his state of melancholy is finely separated from the enjoyment the bird could offer him, this plays on the reader's conflicting emotions and their sense of pleasure and pain. ...read more.

However this is balanced by he elegant and tasteful description of the red wine, which is personified and described as playfully "winking at the brim" thus the wine seems to be a recurring symbol throughout the poem as it naturally entwines death with beauty; as delicious grapes and fruits are decomposed to produce it. The use of wine in many descriptions further underlines the pleasantness that can come from death which Keats only delves into in the last stanza, it is important to know pain and its sting to know pleasures wreath; one must understand the heartache of death to feel the beauty of life. Therefore, Keats appeals to the senses in Ode to a Nightingale through his use of personification and metaphor to convey his surreal state of mind, Dramatic irony in his choice of imagery which plays on the readers senses and underlines the conflicted emotions Keats feels and uses conflicting images of wines and flowers to appeal to the reader's senses. Keats uses conflict successfully to convey the indecision he feels, his poem follows a train of thought, first stating the nightingale is wonderful and he wishes to be like on but later describing that the nightingale cannot feel pleasure or pain, and that pain is a reasonable cost for the joy of living. ...read more.