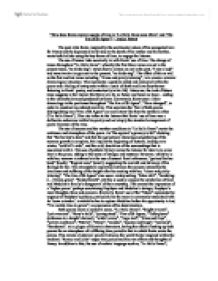 "How does Keats explore aspects of time in 'La Belle Dame sans Merci' and 'The Eve of St Agnes'? - Jessica Bryant The poet John Keats, inspired by the sentimental nature of his unrequited love for f***y and the depression he felt due to the death of his mother and his brother, wrote both ballads using the key theme of time, to engage the listener. The use of tenses links succinctly in with Keats' use of time. The change of tenses throughout "La Belle Dame", whereby the first three verses are set in the present tense, "no birds sing", verses four to eleven are set in the past, "I met a lady" and verse twelve is again set in the present, "no birds sing". The effect of this as well as the first and last verse including, "Alone and palely loitering", is to create a circular chronological structure. This represents a question asked and answered within the poem and a feeling of entrapment within a cycle of death and love (key themes featuring in Keats' poetry, and contextually in his life). ...read more.

However, whilst he is with her, summer is inferred via the use of sensual floral references, "garland for her head" (touch), "fragrant zone" (smell), suggesting the warmth and intimacy of his feelings for her. This atmospheric separation between the seasons intensifies the loneliness and suffering of the knight after his meeting with her, "alone and palely loitering". "The Eve of St Agnes" also uses a wintry setting, "bitter chill", "trembling [...] frozen grass", "frosted breath", yet this is used to conjure the symbolism of God and Madeline's family's disapproval of their courtship. This creates the impression of a 'higher power' perhaps scrutinising Porphyro and Madeline's doings; Porphyro's inner thoughts, fears and paranoia. Similarly, Keats' use of the "Moon" represents the urgency of Porphyro's passion, particularly as the moon is commonly associated with its 'lunar calendar', in which he has to capture Madeline before his opportunity is lost, "I've mickle time to grieve", an expression of his determination. Both poems create a medieval scene, "La Belle Dame"; "knight-at-arms", "pale warriors", "faery's child", "pacing steed", "Eve of St Agnes; ""lofty plume" (reference to a knight's helmet), "witch's sieve", "liege-lord", "Elves and Fays", "wolves and bears", "Merlin", "Dame", "maiden", ...read more.

The use of an irregular rhyme scheme in "The Eve of St Agnes"- Iambic pentameter except for last line which is iambic hexameter - suggests an ongoing narrative throughout as well as displaying the infrequency of the pagan Eve of St Agnes feast (whereby virgins may see their future husbands). Also, syndetic listing is included within the caesura, "and sleep, and dream" creating a rhythm comparable to that of a heart beat, in order to show how Porphyro's fear creates a slow motion of time and an increased physical and s****l awareness, as he prepares to witness Madeline. "La Belle Dame" involves a similar rhyme scheme - iambic tetrameter except for the last line of each stanza that are of varying length - this variation of length represents the abrupt change in the relationship/ knight's life, as the listener, lulled into a security within the regularity, is subconsciously disturbed by a change in rhyme in verse nine. Overall, the use of time in both poems aids the in-depth view into Keats' life and emotional workings. Ultimately, it is his use of archaisms that create the setting, yet it is his use of tenses, seasons, rhythm and rhyme scheme that imply the subtleties of "The Eve of St Agnes" and "La Belle Dame sans Merci". ...read more.