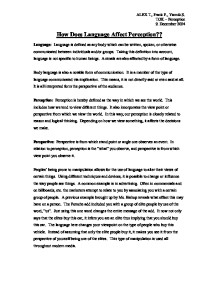 How Does Language Affect Perception?

How Does Language Affect Perception?? Language: Language is defined as any body which can be written, spoken, or otherwise communicated between individuals and/or groups. Taking this definition into account, language is not specific to human beings. Animals are also affected by a form of language. Body language is also a notable form of communication. It is a member of the type of language communicated via implication. This means, it is not directly said or even said at all. It is all interpreted form the perspective of the audience. Perception: Perception is hereby defined as the way in which we see the world. ...read more.

the marketers attempt to relate to you by associating you with a certain group of people. A previous example brought up by Ms. Bishop reveals what effect this may have on a person. The Porsche add included you with a group of elite people by use of the word, "us". Just using this one word changes the entire message of the add. It now not only says that the elites buy this car, it infers you are an elite thus implying that you should buy this car. The language here changes your viewpoint on the type of people who buy this vehicle. ...read more.

By using certain words and phrases, language can evoke certain emotions towards people and other objects or ideas. This affects our perception because it makes us view the situation in a different manner. For example, propaganda statements can cause people to "hate", or feel a certain way towards a given group of people. This affects logical thinking and reason in the sense that it predetermines judgments and actions towards that group of people. The second way that perception logical thinking and reason are related is very similar. It categorizes the viewer as a certain type of person or member of a group. It then makes a statement or relation about that group of people which makes one make their judgments as if they were one of that group. ALEX T., Frank F., Yannik S. TOK - Perception 9. December 2004 ...read more.

** 2 Stars
This has the potential to be a good essay as the writer shows a degree of understanding and makes an effort to explain.
The definitions of perception etc. at the beginning of the essay should be incorporated into paragraphs.
More examples and quotes are needed to support the statements.
Proof reading needed.
A conclusion which summarises and gives a chance for the writer to give their opinion is necessary at the end.