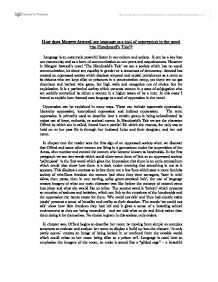 how does margret atwood use language as a tool of oppression

How does Margret Atwood use language as a tool of oppression in the novel 'the Handmaid's Tale'? Language is an extremely powerful factor in our culture and society. It can be a key into our community and as a form of communication to our peers and acquaintances. However in Margret Atwood's novel 'The Handmaid's Tale' we see a society which has no equal communication, let alone any equality in gender or a consensus of democracy. Atwood has created an oppressed society which displays corporal and capital punishment as a norm to its citizens who are kept alike to prisoners in a concentration camp, yet there are no gas chambers and barbed wire gates, but high walls and categories not of choice but for exploitation. It is a patriarchal society which presents women in a state of subjugation who are socially controlled by either a woman in a higher status of by a man. In this essay I intend to explain how Atwood uses language as a tool of oppression in the novel. Oppression can be explained in many ways. These can include systematic oppression, hierarchy oppression, internalized oppression and indirect oppression. The term oppression is primarily used to describe how a certain group is being subordinated by unjust use of force, authority, or societal norms. In Handmaid's Tale we see the character Offred by which she is called, forced into a parallel life which she resents, the ...read more.

Language is used here to emphasize the imagery of the room, to make it sound like a "gilded cage" - a beautiful room which still incarcerates her. 'They've removed everything you could tie a rope to' emphasizes the prison concept and develops on the idea that there is social control of Offred and society itself. Chapter two in the book provides a real indication of freedom these handmaiden's have- none. 'flat-heeled to save the spine and not for dancing' illustrates that dancing or any form of pleasure is discriminated as it is not what they are for, they are to do as they are told or else they will be sanctioned. Language here exhibits the reality of their society of Gilead. They are confined to rooms that appear to be perfect when in fact they are stifling even though the window is open; the words they've removed anything you could tie a rope to states that people don't want to be here, they would rather hang themselves because they are that oppressed by their environment. Language is also used to convey the imagery of the outfits for the citizens of Gilead; sumptuary laws would have a major control point here as they could restrain any form of luxury. The outfits described in chapter two present the garments to be quite restricting and uncomfortable. ...read more.

He uses satyr to get his issue across that there is an increase in the population of Ireland which is a contrast to the story which has a decrease in birth rates. His proposal to solve the issue is so sinister and brutal it then becomes similar to the novel in tow. 'The Handmaid's Tale' is a story about Offred, her thoughts and her life in Gilead. The society she is living in is oppressive. Her society is so tyrannical that she has no freedom whatsoever. Language is used to convey this by creating vivid images in the reader's head that they feel they are there with her in that society. She is so restricted in what she does she can't even have a diary to console her thoughts to, she is isolated, all the women are in some way as they don't feel comfortable talking to others, they aren't allowed. Society is meant to be a community, but Gilead is a concentration camp. Language displays the emotions these women feel and uses words like 'isolation', 'forlorn', palimpsest'. Gilead has no equality but a ladder of status and women are to live in a patriarchal society. This is shown by the dress code, her room, and what we are allowed to see through her eyes. Language is used as a tool of oppression, just as today's society is used by the government, and influenced to think whatever the mass media states. ...read more.