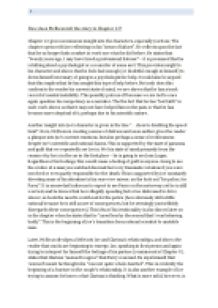 ﻿How does McEwan tell the story in Chapter 12? Chapter 12 gives us immense insight into the characters, especially Joe Rose. The chapter opens with Joe reflecting on his ?sense of failure?. He reflects upon the fact that he no longer finds comfort in work nor what he did before. He states that ?twenty years ago, I may have hired a professional listener? ? it is presumed that he is talking about a psychologist or a councilor of some sort. This provides insight to his character and shows that he feels bad enough (or doubtful enough in himself) to deem himself necessary of going to a psychologist for help. It could also be argued that this implies that he has sought this type of help before. Not only does this confirm to the reader his current state of mind, we are shown that he has a track record of mental instability. This possibly puts us off because we are led to once again question his competency as a narrator. The the fact that he has ?lost faith? in such work shows us that it may not have helped him in the past, or that he has become more skeptical of it, perhaps due to his scientific nature. ...read more.

Clarissa ?broke away, snatched her coat and was gone?. McEwan uses imagery here to allow the reader the abruptness of her exit. The blunt yet plosive ?b? sound in broke is antithetical to the warm ?w? sound which is repeated at the beginning of the previous sentence, and emphasizes the sudden parting of the embrace as well as being symbolic for the breaking relationship. Throughout the novel, Joe?s insecurity is purposefully shown by McEwan and in Chapter 12 this is highlighted in a number of ways. Again, McEwan informs the reader of Joe?s habit of role-playing, pretending he is somebody different. Joe gives both himself and Clarissa a different persona briefly, actually calling them ?our roles? and describing the role he wanted to play as ?the indignant secret lover?. Not only does this show immaturity, it is a way for McEwan to tell us the story of his insecurity by showing us he is always paranoid for example about Clarissa having an affair with a ?secret lover?. This happens again when he describes his actions as a ?performance?, only this time it is as if he feels he has an audience ? perhaps paranoid about being watched? ...read more.

Which, of course, he isn?t. He has already stated many a time in the novel that it will be forever impossible to rule any one of the men involved in the accident from guilt because none of them would ever be able to know who let go of the rope of the balloon first. Therefore, he is lying to Jean Logan, a quality which as a reader of a narrator, we almost loathe. Primarily we view Joe as a reliable narrator due to his analytical thinking. However, when his narrow-mindedness and selfishness are made apparent by the author (McEwan) we are made to trust him less and less. The addition of Clarrisa?s doubt that he is right (and sane) means we are led to distrust him a lot. I think the character of Joe is initially meant to come across as a hardworking and scientific but it is this scientific nature that is his downfall. He believes he is ?incontrovertibly right? and this narrow-mindedness is not a pleasant trait. He is also unwilling to put any belief into love or religion because he deems his simple rational outlook to be the only way forward. And as readers, we do not want our narrator to be like him. ...read more.