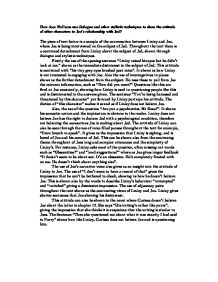 How does McEwan use dialogue and other stylistic techniques to show the attitude of other characters to Joes relationship with Jed?

How does McEwan use dialogue and other stylistic techniques to show the attitude of other characters to Joe’s relationship with Jed?

The piece of text below is a sample of the conversation between Linley and Joe, where Joe is being interviewed on the subject of Jed. Throughout the text there is a continued detachment from Linley about the subject of Jed, shown through dialogue and stylistic techniques.

Firstly the use of the opening sentence “Linley raised his eyes but he didn’t look at me.” shows us the immediate disinterest in the subject of Jed. This attitude is continued with “his tiny grey eyes brushed past mine”. It shows us how Linley is not interested in engaging with Joe. Also the use of interrogatives in places shows us the further detachment from the subject. He uses these to pull from Joe the relevant information, such as “How did you meet?” Questions like this are fired at Joe constantly, showing how Linley is used to questioning people like this and is disinterested in the answers given. The sentence “You’re being harassed and threatened by this character” put forward by Linley portrays his attitude. The diction of “this character” makes it sound as if Linley does not believe Joe.

Also, the use of the question “Are you a psychiatrist, Mr Rose?”. It shows his sarcastic nature and the implicature is obvious to the reader. Lenley does not believe Joe has the right to declare Jed with a psychological condition, therefore not believing the accusations Joe is making about Jed. The attitude of Linley can also be seen through the use of voice filled pauses throughout the text for example, “Drew breath to speak”. It gives us the impression that Linley is sighing, and is bored of Joe and his account of Jed. This can be shown also from the continuing theme throughout of Joes long and complex utterances and the simplicity of Linley’s. For instance, Linley asks most of the question, often missing out words such as “Obscenities?” and “lewd suggestions?” where as Joe gives longer feedback “It doesn’t seem to be about sex. It’s an obsession. He’s completely fixated with on me. He doesn’t think about anything else”.

The use of Joe’s narrative voice also gives us an insight into the attitude of Linley to Joe. The use of “I don’t seem to have a record of that” gives the impression that he can’t be bothered to check, showing us how he doesn’t believe Joe. This is shown also by the words to describe Linley’s behaviour “untempted” and “twitched” giving a dismissive impression. The use of adjacency pairs throughout the text shows us the contrasting views of Linley and Joe. Linley gives shorter sentences that Joe showing his disinterest.

This attitude can also be shown in the novel where Clarissa doesn’t believe Joe about the letter in chapter 12. She says “His writing’s rather like yours”, giving the impression that she thinks it is suspicious that the writing is similar to Joes. The Sentence “Then she questioned me about what it was exactly I had said to Parry” shows how like Linley, Clarissa does not believe Joe and is questioning him.