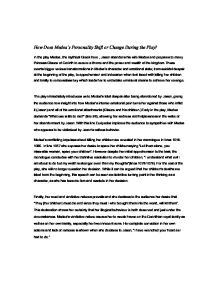 How Does Medea's Personality Shift During the Play ?

How Does Medea's Personality Shift or Change During the Play? In the play Medea, the mythical Greek hero , Jason abandons his wife Medea and prepares to marry Princess Glauce of Corinth to secure a throne and the power and wealth of the kingdom. These events trigger various transformations in Medea's character and emotional state; from suicidal despair at the beginning of the play, to apprehension and indecision when first faced with killing her children and finally to remorseless fury which leads her to undertake unnatural means to achieve her revenge. ...read more.

(line 96), showing her sadness and helplessness in the wake of her abandonment by Jason. With this line Euripedes implores the audience to sympathize with Medea who appears to be victimized by Jason's callous behavior. Medea's conflicting impulses about killing her children are revealed in her monologue in lines 1018-1080. In line 1057 she exposes her desire to spare her children saying "Let them alone, you miserable woman, spare your children". However despite her initial apprehension to the task, the monologue concludes with her definitive resolution to murder her children, "I understand what evil I am about to do but my wrath is stronger even than my thoughts"(lines 1078-1079). ...read more.

Finally, her cruel and vindictive natures prevails and she declares to the audience her desire that "They [her children] must die and since they must I who brought them into the world, will kill them". This declaration shows her certainty that her illogical behaviour is both deserved and just under the circumstances. Medea's vindictive nature causes her to wreak havoc on the Corinthian royal family as well as on her own family, especially her two innocent sons. Her complete conviction in her own actions and lack of remorse is shown when she declares to Jason, "I have wrenched your heart as I had to do." ...read more.