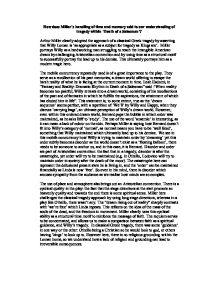 How does Millers handling of time and memory add to our understanding of tragedy within Death of a Salesman?

How does Miller's handling of time and memory add to our understanding of tragedy within 'Death of a Salesman'? Arthur Miller clearly adopted the approach of a classical Greek tragedy by asserting that w***y Loman is 'as appropriate as a subject for tragedy as Kings are'. Miller portrays w***y as a hardworking man struggling to reach the intangible American dream by challenging Aristotelian convention and by using time as a structural motif to successfully portray the lead up to his demise. This ultimately portrays him as a modern tragic hero. The mobile concurrency repeatedly used is of a great importance to the play. They serve as a recollection of his past memories, a dream world offering to escape the harsh reality of what he is facing at the current moment in time. Leah Hadomi, in "Fantasy and Reality: Dramatic Rhythm in Death of a Salesman" said :'When reality becomes too painful, w***y retreats into a dream world, consisting of his recollections of the past and of fantasies in which he ful?lls the aspirations, the attainment of which has eluded him in life". This statement is, to some extent, true as the 'dream sequence' seems perfect, with a repetition of 'We'll' by w***y and Happy, when they discuss 'carrying bags', an ultimate perception of w***y's dream world. ...read more.

The fact that Miller manipulated this to allow these long stage directions be at the start portray how he wanted emphasis the corruption the capitalist society brings onto us, and this is reinforced by Howards inhumane treatment towards him: "You didn't crack up again, did you?". The 'actual time' period is also an important factor. The play was written at around the time of the 1940's, after the 'great boom' in the 1920's had occurred, so Miller must have used the idea of the 'boom' and how the American dream was an endless hope where one would dream of 'possibility and a high social status'. As the Wall Street crash occurred in 1929, we see that perhaps Miller wrote this play to underline the theme that the American dream was always intangible without religion, or some grounding force, yet the Loman family didn't realise this, and this was their hamartia. One may say that because Miller himself was involved in communist activities (Arthur miller: a critical study), he had a Marxist attraction, and perhaps wants to show how w***y was completely destroyed by the capitalist society which was "grappling with a much superior force" (Tragedy and the Common Man). ...read more.

With Linda, we do not see any social life associated with her; all we see is that she is merely w***y's supporter as she always "makes excuses" up for him, and the dishonesty that she knows his flaws lead to his downfall. The fact that Linda leaves w***y responsible (I can't understand it, w***y) shows incapability to guide her, and we see her character disintegrate. We therefore see, as a modern audience, how women are imprisoned, and clearly we could see that the woman was imprisoned in w***y's mind (through mobile concurrency), and Linda being physically imprisoned. Miller again manipulated time to echo a social comment about women being imprisoned, so do we therefore see Linda as a tragic victim, more than w***y in society? To conclude, Miller effectively manipulates time through many ways such as mobile concurrency. w***y's demise was merely his obstructions from the past which stopped him from leading on his delusional present. Miller effectively portrayed how he fell from a mediocre man to a state even lower than that on the hierarchy scale. On a personal level, the cyclical quality Miller presents in the fact that there was no religious grounding shows how nothing can be possible without faith; the cyclical quality reinforced it by using time at the start, and at the end, to see what message Miller was reinforcing. ?? ?? ?? ?? ...read more.