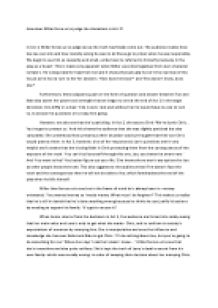 How does Miller force us to judge all the characters in Act 3 of All My Sons?

﻿How does Miller force us to judge the characters in Act 3? In Act 3, Miller forces us to judge Joe as the truth has finally come out. The audience realise how low Joe can sink and how morally wrong he was to let Steve go to prison when he was responsible. We begin to see him as cowardly and small, unlike how he referred to himself previously in the play as a ?beast?. This is made very apparent when Miller uses interrogatives from Joe?s character to Kate?s. He?s desperate for help from her and it shows that actually he isn?t the real man of the house as he has to turn to her for answers. ...read more.

However, we also see that she?s panicking. In Act 2, she says to Chris ?We?re dumb Chris? You?ve got to protect us.? And this shows the audience that she was slightly panicked but also calculated. She understood how precarious their situation was but thought that their son Chris would protect them. In Act 3, however, a lot of her responses to Joe?s questions aren?t very helpful and it seems that she?s losing faith in Chris protecting them from the consequences of the exposure of the truth. ?You can?t bull yourself through this one, Joe, you better be smart now.? And ?You want to live? You better figure out your life.? She knows there aren?t any options for Joe as other people know the truth. ...read more.

?It?s got to excuse it!? When Annie returns from the bedroom in Act 3, the audience are forced into really seeing that her main value and care is only to get what she wants- Chris, and to conform to society?s expectations of a woman by marrying him. She is manipulative and uses the influence and knowledge she has over Keller and Kate to get Chris. ?I?ll do nothing about Joe, but you?re going to do something for me.? When Ann says ?I said he?s dead. I know?? Miller forces us to see that she?s insensitive and also quite ruthless. She?s kept the truth of Larry?s death a secret from his own family- which was morally wrong- in order of swaying their decision about her marrying Chris. ...read more.