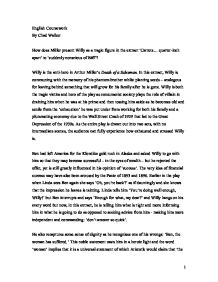 How does Miller present w***y as a tragic figure in the extract Carrots quarter-inch apart to suddenly conscious of Biff?

English Coursework By Chad Walker How does Miller present w***y as a tragic figure in the extract 'Carrots... quarter-inch apart' to 'suddenly conscious of Biff'? w***y is the anti-hero in Arthur Miller's Death of a Salesman. In this extract, w***y is communing with the memory of his phantom brother whilst planting seeds - analogous for leaving behind something that will grow for his family after he is gone. w***y is both the tragic victim and hero of the play as consumerist society plays the role of villain in draining him when he was at his prime and then tossing him aside as he becomes old and senile from the 'exhaustion' he was put under from working for both his family and a plummeting economy due to the Wall Street Crash of 1929 that led to the Great Depression of the 1930s. As the entire play is drawn out into two acts, with no intermediate scenes, the audience can fully experience how exhausted and stressed w***y is. Ben had left America for the Klondike gold rush in Alaska and asked w***y to go with him so that they may become successful - in the eyes of wealth - but he rejected the offer, yet is still greatly influenced in his opinion of 'success'. ...read more.

This line refers to the riches of Alaska and the guaranteed life insurance. The word 'diamond' also alludes to how perfect and flawless his plan is. This choice gives him back his dignity and satiates his pride. The other option was to work for Charley but a reason he cannot accept his offer is that he cannot understand him: 'What the h**l is goin' on in your head?' This shows how alienated from society he has become and even Linda can recognise this: 'He's just a little boat looking for a harbour' somewhere to settle and feel safe but the analogy of the sea represents how his environment is changing and he cannot adjust to it. (For example, there never used to be apartments surrounding his house - this change occurred partly due to the increase of immigrants annually arriving in the United States; in 1900, 448,572 immigrants were admitted into the United States and in 1910 it had increased to 1,041,5702 which also had a knock-on-effect on the amount of jobs available.) The thing that is 'goin' on in [his] head' is the life insurance. ...read more.

The present is flooded with conversations of the past and this expressionistic, theatrical technique allows the audience to visualise how distorted his memory is as well as allow them to feel empathy for his difficulty to focus on one time. Movements are described '[Frantically]'. Miller's use of dramatic techniques certainly shows w***y as a tragic figure as he is at a loss of how to control himself. At the end of this extract w***y is '[suddenly conscious of Biff]' and focuses again on the present out of fear of his inner thoughts being exposed. w***y is tragic as he has no one to confide in. Even though he tells Linda 'You're my foundation and my support' he still cannot tell her what he intends to do because 'the woman has suffered' and this is how Miller has created a tragic, antihero. He is not a man to aspire to: he cannot provide for his family and he does not know how to respect others but his perseverance and sheer determination to make something, perhaps not now for himself but, for his boys is what makes him the modern day tragic hero that so many fathers are. ...read more.