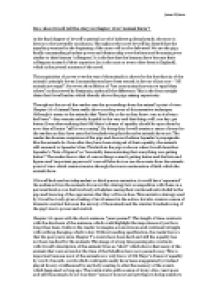 How does Orwell tell the story in Chapter 10 of Animal Farm?

﻿James Clyburn How does Orwell tell the story in Chapter 10 of ?Animal Farm?? In the final chapter of Orwell?s satirical novel of indirect political attack, the story is drawn to the inevitable conclusion. Throughout the novel Orwell has hinted that the equality promised in the beginning of the story will not be delivered. We see the pigs finally commanding absolute power and dictatorship over the farm and becoming ever similar to their human ?colleagues?. It is the fact that the humans have become their colleagues instead of their superiors (as is the case on every other farm in England), which is the pivotal moment of the novel. This acquisition of power over the rest of the animals is shown by the fact that six of the animals? principle Seven Commandments have been erased, in favour of just one ? ?All animals are equal?. However, the addition of ?but some animals are more equal than others? as discovered by Benjamin, makes all the difference. This is the first outright claim that Orwell makes which directly shows the pigs seizing superiority. ...read more.

This narrative strategy used by Orwell not only gives a feeling of involvement in the action, but also creates a sense of dramatic contrast between the naivety of the animals and the sinister foreshadowing of the pigs? rise to power and control. Chapter 10 opens with the short sentence ?years passed?. This length of time contrasts with the shortness of the sentence, which could highlight the importance of, just how long it has been. It allows the reader to imagine a monotonous and continued struggle with nothing changing, which is key. Without needing specification, the reader knows that the past years since Chapter 9?s events have been hard and still the equality has not been reached for the animals. This image of a long time passing also contrasts with Orwell?s description of the animals? lives as ?short? which shows that many of the animals that were around at the time of the Rebellion have now passed away. This is important because most of the animals now only know of Old Major?s dream of equality by word of mouth- words which could quite easily have been exaggerated (or indeed played down) ...read more.

?It was a pig walking on his hind legs.? ?He carried a whip in his trotter.? These quotes clearly demonstrate Orwell?s use of this technique and as a reader I feel it allows connection to the animals? dismay. Not only this, but it also acts as a conclusion of sorts to the earlier foreshadowing and solidly confirms the reader?s suspicions. For the animals, this is the first time they are aware of any betrayal at all so it comes as more of a shock to them. However, the reader has been able to see beyond the pigs? (in particular Squealer?s) lies and now it only confirms our knowledge of the inevitable conclusion that through dreams of communist equality would come corruption and greedy superiors. Throughout his novel, Orwell gives us a deep insight into his opinion on politics and society. Upon closer inspection we can see inside the ?fictional? events of ?Animal Farm? to a more real situation, with real corruption. I feel as if Orwell hopes that he can teach the reader by forcing them to feel sympathy for the animals, and in turn, their real life equivalents. ...read more.