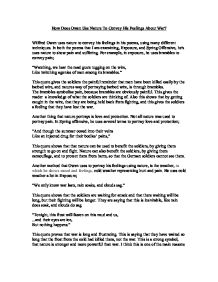 How Does Owen Use Nature To Convey His Feelings About War?

How Does Owen Use Nature To Convey His Feelings About War? Wilfred Owen uses nature to convey his feelings in his poems, using many different techniques. In both the poems that I am examining, Exposure, and Spring Offensive, he's uses nature to show pain and suffering. For example, in exposure, he uses brambles to convey pain; "Watching, we hear the mad gusts tugging on the wire, Like twitching agonies of men among its brambles." This quote gives the soldiers the painful reminder that men have been killed easily by the barbed wire, and natures way of portraying barbed wire, is through brambles. The brambles symbolise pain, because brambles are obviously painful. This gives the reader a knowledge of what the soldiers are thinking of. Also this shows that by getting caught in the wire, that they are being held back from fighting, and this gives the soldiers a feeling that they have lost the war. ...read more.

This quote shows that the soldiers are waiting for attack and that there waiting will be long, but their fighting will be longer. They are saying that this is inevitable, like rain does soak, and clouds do sag. "Tonight, this frost will fasten on this mud and us, ...and their eyes are ice, But nothing happens." This quote proves that war is long and frustrating. This is saying that they have waited so long that the frost from the cold had killed them, not the war. This is a strong symbol, that nature is stronger and more powerful than war. I think this is one of the main reasons that Owen uses nature to portray his feelings, because it often has a stronger impact on the readers. "Till like a cold gust thrills the world At which each body and its soul begird And tighten them for battle. ...read more.

As the sun comes up, they can feel the warmth, and see the light, which tells them that they are still alive. It gives them hope, because it its a conformation of there existence. Also is says that the sun is mightier than god, refered to as "his". I think that this means that they would rather feel the suns warmth then die for their country. I think that the main reason that Owen uses nature to portray his feelings because it is an easy way of expressing deep emotions and feelings about a thing you feel strongly against a subject, eg: war. Owen's expressions are strong, in the sense that they get his point across, and they are emotionally thought provoking, in the sense where they make you think about what is must feel like to serve, sometimes, against your will in something as horrific as a world war. I think that using nature to portray feelings and emotions, thoughts and views in poems is a very effective way. ...read more.

Some good detailed analysis shows writer has understood poems. Remains focused on question throughout. At times analysis is simplistic, closer analysis of language would lead to deeper exploration of nature in Owen's poems.