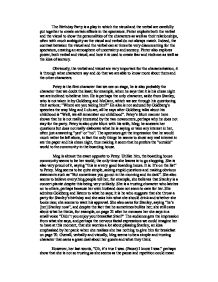 The Birthday Party is a play in which the visual and the verbal are carefully put together to create certain effects in the spectators. Pinter exploits both the verbal and the visual to show the personalities of the characters as well as their relationships, often with much ambiguity as the visual and verbal do not always match. Indeed, the contrast between the visual and the verbal can at times be very disconcerting for the spectators, creating an atmosphere of uncertainty and secrecy. Pinter also explores power, both verbal and visual, and how it is used to create fear and violence as well as the idea of secrecy. Obviously, the verbal and visual are very important for the characterisation, it is through what characters say and do that we are able to know more about them and the other characters. Petey is the first character that we see on stage, he is also probably the character that we doubt the least; for example, when he says that it is his chess night we are inclined to believe him. He is perhaps the only character, aside from Stanley, who is not taken in by Goldberg and McCann, which we see through his questioning their actions; "Where are you taking him?" He also is not seduced by Goldberg's speeches the way Meg and Lulu are, all he says after Goldberg talks about his childhood is "Well, we all remember our childhood". Petey's blunt manner here shows that he is not really interested by the two newcomers, perhaps why he does not stay for the party. Petey is also quite blunt with his wife, Meg; he answers her questions but does not really elaborate what he is saying or take any interest in her, often just answering "yes" or "no". The spectators get the impression that he would much rather be left alone, in fact the only things he seems to show any real interest in are the paper and his chess night, thus making it seem that he prefers the "outside" world to the community in the boarding house. ...read more.

the audience could think that this is because he is afraid as if he didn't recognise the name he would've perhaps said so when Meg asked him. He also asks McCann questions about him, although he does not say Goldberg's name but simply refers to him as "he". Goldberg however says that he "hasn't had the pleasure" when Meg asks him if he's met Stanley, this fits with McCann's refusing to acknowledge that Stanley may have known him before: the two characters try to hide any links they may have with Stanley. Stanley also tries to make Goldberg leave, again showing his fear of him, either because he is from some kind of organisation that Stanley has run away from or because Stanley is simply afraid of "outsiders". Thus, Stanley shows his fear through what he says, despite never stating that he is actually afraid. Stanley's relationships with Goldberg and McCann revolve around secrecy and power. Indeed, the characters of McCann and Goldberg themselves seem to be defined by their power as well as their origins, which are shown verbally and visually McCann is a typical Irish name, and the two Christian names he is called by in the play, Dermot and Seamus, are also typically Irish. As well as this we could imagine that the character speaks with an Irish accent. There are also certain humorous things to do with McCann's "irishness". Firstly, when Stanley asks him where he is from he replies "Where do you think?", this could seem funny to the audience as it is plainly obvious that McCann comes from Ireland. Secondly, McCann refuses to drink Scotch whisky, pouring himself Irish whisky instead. McCann is also characterised by his physical power. It is always he who carries out physical actions, such as breaking the glasses, bringing Stanley downstairs and fighting physically with him. McCann's physical power is easy to see but this power also causes him to act like a servant as he has to carry the suitcases and the alcohol. ...read more.

This is for several reasons: Firstly, he paints a picture of a good, family life which is hard to connect with his seduction of Lulu and his behaviour towards Stanley. Secondly, the way he describes his mother is almost identical to the way he describes his wife; the echoes in his description of them make it seem as though he is almost making them up. Lastly, we know Goldberg lies, for example he tells Petey that McCann is called Dermot and later on in the book he calls him Seamus, he also tells Petey that Stanley is alright. Lies seem to be quite important in this play, especially when talking about the past. Many of the characters lie to each other or at least say something which we could think was a lie. Stanley talks about being a concert pianist and his business, Goldberg talks about his family and Meg talks about hers, while Petey lies to Meg at the end about Stanley still being upstairs. Many of these lies do not seem to do any harm; in fact they seem to make the characters feel better about themselves as they become nostalgic and reflective. However, they add to the level of uncertainty which we find in the play and make it even harder for the audience to know what is going on. To conclude, Pinter takes advantage of both the verbal and the visual to emphasise certain things and explain them completely, such as the characters and their relationships, while also using them to show the themes of the play: Power, violence, fear and secrecy. He also uses it to relax the tension at times through humour but most of all it is used to create ambiguity. The audience can be sure of very few of the things that are said in this play which leads to many varied interpretations of the events and the characters. Perhaps this is what Pinter was hoping for. ...read more.