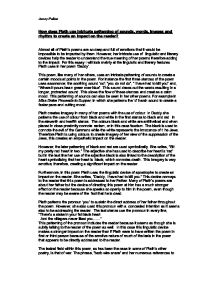 How does Plath use intricate patterning of sounds, words, images and rhythm to create an impact on the reader?

How does Plath use intricate patterning of sounds, words, images and rhythm to create an impact on the reader? Almost all of Plath's poems are so deep and full of emotions that it would be impossible to be impacted by them. However, her intricate use of linguistic and literary devices help the reader to understand the true meaning of her poems therefore adding to the impact. For this essay I will look mainly at the linguistic and literary features Plath uses in her poem 'Daddy'. This poem, like many of her others, uses an intricate patterning of sounds to create a certain moods at points in the poem. For instance the first three stanzas of the poem uses assonance; the soothing sound 'oo'; "you do not do", "I have had to kill you" and, "Where it pours bean green over blue". This sound draws out the words resulting in a longer, protracted sound. This slows the flow of these stanzas and creates a calm mood. This patterning of sounds can also be seen in her other poems. ...read more.

This imagery is very emotive; therefore, creating a significant impact on the reader. Furthermore, in this poem Plath uses the linguistic device of apostrophe to create an impact on the reader. She writes, "Daddy, I have had to kill you." This device conveys to the reader that this poem is addressed to her Father. Many of Plath's poems are about her father but the device of directing this poem at him has a much stronger effect on the reader because she speaks so openly to him in the poem, even though the reader may be aware of the fact that he is dead. Plath patterns the pronoun 'you' to sustain the direct address of her father throughout the poem. However, she also used this pronoun with a concealed intention as it seems also to be addressing the reader. The last stanza use the pronoun in every line, "There's a stake in your fat black heart And the villagers never liked you......" This patterning of the pronoun includes the reader because it seems as though she is subtly talking to the reader of the poem as well. ...read more.

The association of these two opposite images is rather unpleasant making the reader feel uncomfortable. Plath's use of enjambment has a strong effect as the poem seems to pour out of Plath and onto the page in a disordered but constant stream of imagery and sadistic phrases. This creates the hateful tone that Plath intentionally uses in some of her other poetry about her Father. Caesura is used to help make the poem somewhat readable but does not break the flow of 'hate' that the enjambment creates. The syntax of many of the sentences in the poem is also disordered which adds to this effect. Combined the syntax and enjambment create an impact on the reader because of the overflowing feeling of Plath's hate that they convey. In conclusion it is clear to see that the subject of this poem is one that Plath feels incredibly strong emotions towards, in this case hate. It would therefore be impossible to not have some sort of impact on the reader. However, through her use of linguistic and literary devices like assonance, imagery, apostrophe, lexical fields, allusions and enjambment Plath conveys her message and emotions effectively to the reader resulting in a much stronger impact. Jenny Patten ...read more.