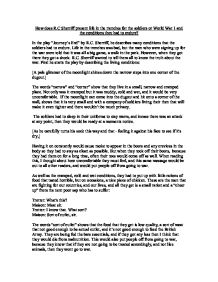 How does R.C Sherriff present life in the trenches for the soldiers or World War 1 and the conditions they had to endure?

How does R.C Sherriff present life in the trenches for the soldiers or World War 1 and the conditions they had to endure? In the play "Journey's End" by R.C. Sherriff, he describes many conditions that the soldiers had to endure. Life in the trenches was bad, but the men who were signing up for the war were told that it was all a big game, a walk in the park. However, when they got there they got a shock. R.C. Sherriff wanted to tell them all to know the truth about the war. First he starts the play by describing the living conditions: [A pale glimmer of the moonlight shines down the narrow steps into one corner of the dugout.] The words "narrow" and "corner" show that they live in a small, narrow and cramped place. Not only was it cramped but it was muddy, cold and wet, and it would be very uncomfortable. If the moonlight can come into the dugout and hit onto a corner of the wall, shows that it is very small and with a company of soldiers living their then that will make it even tighter and there wouldn't be much privacy. ...read more.

These are the men that are fighting for our countries, and our lives, and all they get is a small ration and a "cheer up" from the next poor sap who has to suffer: Trotter: What's this? Maison: Meat sir. Trotter: I know that. What sort? Maison: Sort of cutlet, sir. The words "sort of cutlet" shows that the food that they get is low quality, a sort of meat that not good enough to be actual cutlet, and it's not good enough to feed the British Army. They are being fed the bare essentials, and if they got any less then I think that they would die from malnutrition. This would also put people off from going to war, because they know that if they are not going to be treated accordingly, and not like animals, then they wont go to war. If the soldiers weren't worrying about their food, then they were definitely worrying about the war itself. ...read more.

When they didn't get enough sleep they would get agitated and would spend days without sleep, and if they got on the wrong side of someone, then this would agitate them more, and could lead to outburst at the smallest things: Stanhope: Sit down. Raleigh: It's all right, thanks. Stanhope (Suddenly shouting) Sit down! Stanhope had not slept for days and just the little thing of Raleigh getting on the wrong side of him made him snap. R.C. Sherriff shows that Stanhope is angry in the stage directions: (Suddenly shouting). He gives the reader the impression that Raleigh, because he is the newest, that he doesn't fit in with the rest of the group, that what he is doing is wrong, because he doesn't know any better. Because of this Stanhope gets very angry very quickly. All of these are ways of showing the conditions in which the men had to face during the war. Not only was it the war itself but the pressure of being in a cramped environment, with lots of other men, in the cold and dirt, with little food. R.C. Sherriff brings to the readers what the conditions of war are really like. ...read more.