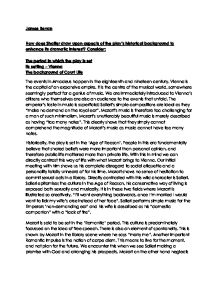 How does Shaffer draw upon aspects of the play's historical background to enhance its dramatic interest?

James Bevan How does Shaffer draw upon aspects of the play's historical background to enhance its dramatic interest? Consider: The period in which the play is set Its setting - Vienna The background of Court Life The events in Amadeus happen in the eighteenth and nineteen century. Vienna is the capital of an expansive empire. It is the centre of the musical world, somewhere seemingly perfect for a genius of music. We are immediately introduced to Vienna's citizens who themselves are also an audience to the events that unfold. The emperor's taste in music is superficial; Salieri's simple compositions are ideal as they "make no demand on the royal ear". Mozart's music is therefore too challenging for a man of such minimalism. Mozart's unutterably beautiful music is merely described as having "too many notes". This clearly shows that they simply cannot comprehend the magnitude of Mozart's music as music cannot have too many notes. Historically, the play is set in the 'Age of Reason'. ...read more.

There is also an element of spontaneity. This is shown by Mozart in the library scene where he says "marry me". Another important Romantic impulse is the notion of carpe diem. This means to live for the moment, and not plan for the future. We encounter this when we see Salieri making a promise with God and arranging his prospects. Mozart on the other hand neglects order and structure and has a child when he clearly doesn't have the mental capacity and ironically the finance to do so. Since the Age of Reason believes that commitment to decorum helped preserve society's important moral standards, the Establishment are very anti-Mozart. This new revolution stands for everything that their culture is against. With this in mind it creates the ideology of new versus old. Society is apprehensive to accept a new phenomenon to break their convention because no one likes to chance change. This theme is faultlessly expressed in Amadeus. Paradoxically it is the lower class citizens who are the ones who understand Mozart's music. ...read more.

As Mozart is such an outcast in this false society it makes the death of him seem inevitable; yet we feel sorry for him as it is largely societies fault for not excepting him. After this speech we see Salieri and Orsini-Rosenberg somewhat ganging up on Mozart. This fits in with the idea of the people within the Age of Reason act together as part of a community. However this is a very malicious way of fighting Mozart. Ironically they are a society revolved around the idea of fairness, yet they are being rude enough to talk in Italian when in the presence of Von Strack who cannot understand it. "Orsini-Rosenberg tears out some pages of Mozart's manuscripts". This shows that both historical backgrounds don't understand what is right and what is wrong. Mozart doesn't understand how to get by in society, this is because he is ahead of his time, where Salieri doesn't understand moral limitations and takes his jealousy too far. Shaffer scrutinises both ways of life and is perhaps showing that because life isn't fair we are never going to have a perfect society. Killing Mozart didn't make Salieri better at music ...read more.