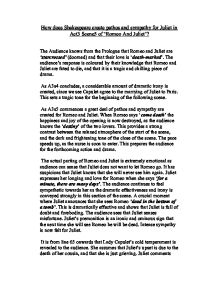 How does Shakespeare create pathos and sympathy for Juliet in Act3 Scene5 of 'Romeo And Juliet'?

How does Shakespeare create pathos and sympathy for Juliet in Act3 Scene5 of 'Romeo And Juliet'? The Audience knows from the Prologue that Romeo and Juliet are 'starcrossed' (doomed) and that their love is 'death-marked'. The audience's response is coloured by their knowledge that Romeo and Juliet are fated to die, and that it is a tragic and chilling piece of drama. As A3s4 concludes, a considerable amount of dramatic irony is created, since we see Capulet agree to the marrying of Juliet to Paris. This sets a tragic tone for the beginning of the following scene. As A3s5 commences a great deal of pathos and sympathy are created for Romeo and Juliet. When Romeo says 'come death' the happiness and joy of the opening is now destroyed, as the audience knows the 'destiny' of the two lovers. This provides a strong contrast between the relaxed atmosphere of the start of the scene, and the dark and frightening tone of the close of the scene. The pace speeds up, as the nurse is soon to enter. This prepares the audience for the forthcoming action and drama. ...read more.

The Audience anticipates that Capulet will soon become violently angry, as it has seen how violently he reacted to Tybald in A1s5. The pace begins to speed up. In the space of a few minutes Capulet goes from teasing Juliet as if she were a young child, to saying harsh insults for example 'die in the streets', that no adult would ever say to a child of Juliet's age. Capulet's unrestrained anger and cruelty seems to be unleashed at this moment. Caplet's emotions are extremely muddled as in A3s4 he shows that he thinks of her as a mature, young lady when he agrees to her marriage to Paris. As Capulet speaks he insults her, calling her a 'mistree minion'. Performed this part of the dialogue on stage in Shakespearean times the audience would have been shocked at Capulet's use of offensive language. However for this part of the scene to look effective in front of a modern audience it would have to be performed more dramatically. Capulet would have to use explosive hand gestures and impulsify his actions to intrigue a modern audience. As the atmosphere gets tenser Capulet's words become harsher and more frightening as his irritation and determination becomes apparent. ...read more.

Today's society would be more likely to condemn the way that the Capulet's treat their daughter as most modern parents accept the need to negotiate in a situation such as Juliet's in A3s5. An Elizabethan audience would be more inclined to sympathise with the Capulet's as the father's governed their daughters until marriage and the daughters did not expect much freedom. In their eyes Juliet was in the wrong. In Elizabethan times people were generally more religious and marriage was seen as a commitment for life. It involved making solemn vows before God and therefore people were more committed to marriage. Juliet's marriage to Paris would have been seen unacceptable if it had taken place. Today though, we live in a secular society and our values have changed. This means that people are no longer prepared to stay married if they do not love their partner anymore. We are generally less loyal and this is why we would feel more sympathy for Juliet, about to be tied down to some one she doesn't love (Paris)! In a contemporary society we have a wider range of views about what is right or wrong. We are more cynical, harder and colder. We can therefore sympathise with Juliet's actions. ...read more.