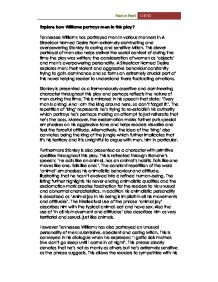 How does Shakespeare create tension in Act 2 Scene 2 of Macbeth?

Explore how Williams portrays men in this play? Tennessee Williams has portrayed men in various manners in A Streetcar Named Desire from extremely dominating and overpowering Stanley to caring and sensitive Mitch. This clever portrayal of men also helps deliver the social context of during the time the play was written; the consideration of women as 'objects' and men's overpowering personality. A Streetcar Named Desire explores men; their violent and aggressive behaviour constantly trying to gain dominance and so forms an extremely crucial part of this novel helping reader to understand there fluctuating emotions. Stanley is presented as a tremendously assertive and domineering character throughout this play and perhaps reflects the nature of men during the time. ...read more.

Eats like one moves like one, talk like one!'. The constant repetition of the word 'animal' emphasises his animalistic behaviour and attitude, illustrating that he hasn't evolved into a refined human-being. The listing further highlights his never ending animalistic qualities and the exclamation mark creates fascination for the readers to his unusual and abnormal characteristics. In addition his animalistic personality is described as 'Animal joy in his being is implicit in all his movements and attitudes'. The intellectual use of the phrase 'animal joy' describes him with the typical animal: eat and have s*x. Also the use of 'in all his movement and attitudes' also describes him as very territorial and s****l, just like animals. ...read more.

It creates an intense feeling in Blanche's heart as she didn't mean 'to lie from heart', helping readers to change their perspective on Mitch because perhaps he wasn't able to understand that it may have been circumstances that lead Blanche is lie about her true age and 'hotel flamingo'. This allows the readers to feel tremendously sympathetic towards Blanche. A Streetcar Named Desire revolves around the overpowering behaviour of men, perhaps reflecting the social context during the time. Stanley is character in the play represented as s******y orientated, forceful and controlling. In general; this novel has presented various different personalities of men however they change knowing truth like Mitch. Tennessee Williams has throughout this play represented various characteristics of men and how they can change, being unable to understand others feelings especially women. ?? ?? ?? ?? Nairuti Patel 11EN2 ...read more.