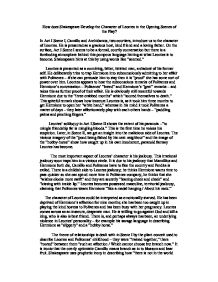 How does Shakespeare Develop the Character of Leontes in the Opening Scenes of the Play?

How does Shakespeare Develop the Character of Leontes in the Opening Scenes of the Play? In Act I Scene I, Camillo and Archidamus, two courtiers, introduce us to the character of Leontes. He is presented as a gracious host, kind friend and a loving father. On the surface, Act I Scene I seems to be a formal, courtly conversation but there is a foreboding atmosphere behind this pompous language hinting at what Leontes is to become. Shakespeare hints at this by using words like "seemed." Leontes is presented as a conniving, bitter, twisted man, a shadow of his former self. He deliberately tries to trap Hermione into subconsciously admitting to her affair with Polixenes - if she can persuade him to stay then it is "proof" she has some sort of power over him. Leontes appears to hear the subconscious remarks of Polixenes and Hermione's conversation - Polixenes' "breed" and Hermione's "gest" remarks - and takes this as further proof of their affair. ...read more.

It is due to his jealousy that Mamillius and Hermione both die, Camillo and Polixenes have to flee the country and Perdita is exiled. There is a childish side to Leontes jealousy; he thinks Hermione wants time to pass quicker so she can spend more time in Polixenes company, he thinks that she "wishes clocks more swift" and they are secretly "leaning cheek and cheek" and "kissing with inside lip." Leontes becomes possessed masculine, territorial jealousy, claiming that Polixenes wears Hermione "like a medal hanging / About his neck." The character of Leontes could be interpreted as emotionally starved. He has been deprived of Hermione's affection for nine months; she has been too caught up in playing the kind hostess to Polixenes and has been busy with her pregnancy. Leontes comes across as an insecure, desperate man. He is willing to go against God and kill a king, who is also is best friend. ...read more.

It is ironic that Hermione talks about how herself and Polixenes' queen are "devils" when this is exactly how Leontes feels. The innocent simile of the "twinned lambs that did frisk i'th'sun" describing Leontes and Polixenes is starkly contrasted with the present day Leontes' malicious behaviour. Polixenes and Leontes' childhood is juxtaposed to the present day, this shows how much things have changed between the two and how they have "tripped" since. The theme of illness is also introduced through Leontes. He himself talks about being "muddy" and "unsettled." Camillo realises that Leontes is insane, that he is "in rebellion with himself," and says that he needs to "be cured / of this diseased opinion." Camillo later talks about Leontes "distemper," he realises that Leontes is unbalanced physically and emotionally. Shakespeare uses prophetic irony in Act I Scene I, in describing how Leontes and Polixenes "seemed to be together" and how Mamillius makes the old "desire yet their life to see him a man. ...read more.