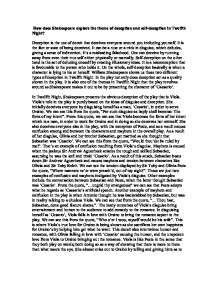 How does Shakespeare explore the theme of deception and self-deception in Twelfth Night?

How does Shakespeare explore the theme of deception and self-deception in Twelfth Night? Deception is the use of deceit that deceives everyone around you including yourself. It is the fact or state of being deceived. It can be a ruse or a trick in disguise, which deludes, giving a sense of indirection. It's a misleading falsehood. One can deceive by running away from even their true self either physically or mentally. Self-deception on the other hand is the act of deluding oneself by creating illusionary ideas. It is a misconception that is favourable to the person who holds it. On the whole, self-deception basically is when a character is lying to his or herself. William Shakespeare shows us these two different types of deception in Twelfth Night. In the play not only does deception act as a quality shown in the play. It is also one of the themes in Twelfth Night that the play revolves around as Shakespeare makes it out to be by presenting the character of 'Caesario'. In Twelfth Night, Shakespeare presents the obvious deception of the play that is Viola. Viola's role in the play is purely based on the ideas of disguise and deception. She initially deceives everyone by disguising herself as a man, 'Cesario', in order to serve Orsino. We can see this from the quote, "For such disguise as haply shall become: The form of my intent". From this quote, we can see that Viola becomes the form of her intent which is a man, in order to work for Orsino and in doing so she deceives her ownself. She also deceives everyone else in the play, with the exception of Feste, and as a result causes confusion among and between the characters and mayhem in the overall play. As a result of her disguise, Olivia and her brother Sebastian, get married as she thought that Sebastian was 'Cesario'. ...read more.

Malvolio is disillusioned about his authority and power over people. We also see him being deluded, thinking that Olivia loves him. He thinks he is as powerful as the countess Olivia even when he is just a servant serving Olivia himself and bosses people lower than him around. In the play Malvolio's self-love is one of the most extreme and unpleasant kind, resulting in overweening pride and self-delusion. The quote, "wise men, that crow so at these set kind of fools, no better than the fools' zanies." We can see that Malvolio thinks that he is clever than most wise men, thus being arrogant and this leads to showing us that he has overweening pride of himself. He also called Feste a "barren rascal". This shows that Malvolio sees himself as a very witty person as he called Feste a witless person by calling him a "barren rascal". Another quote, "Maria once told me that she did affect me; and I have heard herself come thus near, that should she fancy, it should be one of my complexion." shows us Malvoilo is thinking himself handsome and noble enough for "she" who is Olivia. Malvolio is blind as he deceives himself just to suit the outlook of the situation. Another example is when in the play he twists 'Olivia's' words in the letter around to make it sound like she admires his yellow cross-gartered stockings, when Olivia really despises them. His extreme egotism provides comedy for the audience, and a ground for his deception over the letter, as he also believes mistakenly that Olivia loves him and may marry him. This shows once again his deceptively high opinion of himself; that he thinks he may marry into the upper class of society despite being only a steward. His belief of Olivia's love for him, even before he has the letter leaves him vulnerable to be deceived by Maria's letter, as he does not find it surprising that Olivia would be in love with him. ...read more.

He expresses with this idea that our duty in life is to be happy and to make others happy, something he harassed Olivia about in Act1 as she mourned her brother's death. Despite many features of Feste's character that show his has much more depth than what we are led to believe; he also uses disguise and deceit to concrete his role as a fool, a clown who provides humor and entertainment for the audience. "Sir Topas the curate, who comes to visit Malvolio the lunatic".Upon learning of Sir Toby and Maria's gulling of Malvolio, Feste decides to join in the fun. He does this by pretending to be someone else when visiting Malvolio, to further his torture and suffering. Malvolio and Feste's turbulent past had been briefly documented when in Act 1 Malvolio says "I marvel your ladyship takes delight in such a barren rascal". It's interesting to take into account that Feste is supposed to be the fool of the play, but he doesn't setup the humorous gulling of Malvolio and fails to provide the entertainment and humor Sir Toby Belch and Sir Andrew Aguecheek bring to the play. Instead Feste takes part of the humor only with revenge on his mind and not to provide humor, and relies only on quick plays on words to supply humor. This could be Feste disguising that he is not comfortable with his role in life as playing the role of the fool. This disguise can be taken as a self-deception on Feste's part. Shakespeare explores the theme of deception and self-deception in Twelfth Night by creating its characters to use deception in disguise to create comedy in the play, which is one of the major themes of the play, Twelfth Night. The characters go to the extremes of deception by deceiving everyone and even deceiving their own selves just to get what they want which is the love that they desire. From this we can even sometimes associate deception with their madness to get what they want. ...read more.