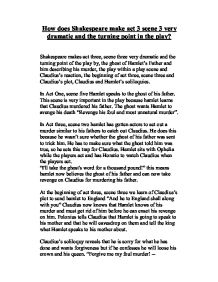 How does Shakespeare make act 3 scene 3 very dramatic and the turning point in the play?

How does Shakespeare make act 3 scene 3 very dramatic and the turning point in the play? Shakespeare makes act three, scene three very dramatic and the turning point of the play by, the ghost of Hamlet's Father and him describing his murder, the play within a play scene and Claudius's reaction, the beginning of act three, scene three and Claudius's plot, Claudius and Hamlet's soliloquies. In Act One, scene five Hamlet speaks to the ghost of his father. This scene is very important in the play because hamlet learns that Claudius murdered his father. The ghost wants Hamlet to avenge his death "Revenge his foul and most unnatural murder". In Act three, scene two hamlet has gotten actors to act out a murder similar to his fathers to catch out Claudius. He does this because he wasn't sure whether the ghost of his father was sent to trick him. ...read more.

"Forgive me my foul murder! -- That cannot be; since I am still possess'd Of those effects for which I did the murder, -- My crown, mine own ambition, and my queen" this means he cannot be forgiven if he is still king and is still married to Gertrude. "Try what repentance can: what can it not? Yet what can it when one cannot repent?" Claudius cannot pray because he is not truly sorry because if he was he would confess and give up his crown and queen and then he could pray and repent. As Claudius is trying to pray Hamlet comes in to kill him "Now might I do it pat, now he is praying; And now I'll do't;--and so he goes to heaven" this means that he cannot kill him while he is praying or Claudius shall go to heaven and Hamlet cannot let his father's murderer go to heaven. ...read more.

But we can recognise his hypocrisy in not wanting to give up what he has gained from murdering his brother. When Hamlet enters the room we know that this is Hamlets perfect opportunity to avenge his fathers murder and kill Claudius. Hamlet hesitates because he thinks Claudius will go to heaven, but we know better, because Claudius has told us the truth in his soliloquy, yet again Hamlet is putting off action. Claudius's final two lines in his soliloquy confirms our beliefs that this was the perfect moment for Hamlet to exact his revenge on Claudius and avenge his fathers death. In conclusion Shakespeare makes act three, scene three very dramatic and the turning point in the play because of the suspense he builds up to Hamlet killing Claudius. And when we think he is going to kill him he doesn't because he believes Claudius will go to heaven. Shakespeare uses Claudius and Hamlets soliloquy to build lots of suspense up and this makes it very dramatic and the turning point of the play. ...read more.