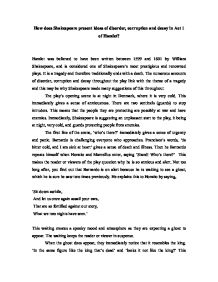 How does Shakespeare present ideas of disorder, corruption and decay in Act 1 of Hamlet?

How does Shakespeare present ideas of disorder, corruption and decay in Act 1 of Hamlet? Hamlet was believed to have been written between 1599 and 1601 by William Shakespeare, and is considered one of Shakespeare's most prestigious and renowned plays. It is a tragedy and therefore traditionally ends with a death. The numerous accounts of disorder, corruption and decay throughout the play link with the theme of a tragedy and this may be why Shakespeare made many suggestions of this throughout. The play's opening scene is at night in Denmark, where it is very cold. This immediately gives a sense of anxiousness. There are two sentinels (guards) to stop intruders. This means that the people they are protecting are possibly at war and have enemies. Immediately, Shakespeare is suggesting an unpleasant start to the play, it being at night, very cold, and guards protecting people from enemies. The first line of the scene, 'who's there?' immediately gives a sense of urgency and panic. Barnardo is challenging everyone who approaches. ...read more.

Hamlet's speech is all over the place and also very emotional. He is not speaking to anyone but the reader or viewer, so these are his thoughts which are everywhere. This shows the reader how his father's death and his uncle consequently stealing the throne and marrying Hamlet's mother has affected him. When Horatio enters the room after Hamlet's emotional and lonesome speech, Hamlet learns of this ghost that resembles his father. Horatio talks to Hamlet and they say: Horatio My lord, I think I saw him yesternight. Hamlet Saw who? Horatio My Lord, the king your father. Hamlet The king my father? Hamlet keeps asking and questioning Horatio just to make sure. Hamlet then says, 'I'll watch tonight; perchance 'twill walk again.' He wants to see for himself if there is actually a ghost that resembles his father. Act 1, Scene 3 of the play is quite short and is about Laertes saying goodbye to his sister Ophelia, and also warning her of 'Hamlet and the trifling of his favours' as their difference in status is huge, and that it is unlikely that they will ever get married. ...read more.

The final scene of the first act, scene 5, is when the ghost tells Hamlet that he is his father's spirit, and also tells him that he did not die from a snake's bite, but Claudius killed him by pouring poison in his ear while he was sleeping. His father's spirit tells Hamlet to go and revenge his murder. This is a example of corruption, and it is setting up more death to come, and also reveals that Claudius poisoned Hamlet which signifies disorder and emotion. The ghost says to Hamlet, 'revenge his foul and most unnatural murder.' Foul is a negative, harsh word, but is a good description of the scene and what is going on. It signifies more decay and corruption. Then, right at the end of the scene, Hamlet says, 'time is out of joint.' This suggests that the universe is falling in on itself, time is failing, and there is corruption and disorder everywhere. This first act of Hamlet is very descriptive and powerful. Shakespeare uses powerful imagery to create images of despair and corruption. It all follows on, as Claudius begins to plan more things, and the audience experience more disorder and decay throughout. ...read more.

This essay explores Act One in detail and relates much of the analysis to the question. The essay would demonstrate a higher level of analytical skill if points were linked through theme and key ideas rather than taking in each scene in turn.