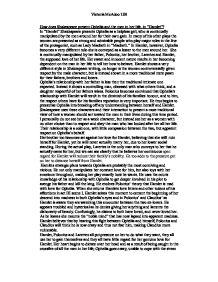 How does Shakespeare present Ophelia and the men in her life, in &quot;Hamlet&quot;?

How does Shakespeare present Ophelia and the men in her life, in "Hamlet"? In "Hamlet" Shakespeare presents Ophelia as a helpless girl, who is continually manipulated by the men around her for their own gain. In many of his other plays the women are presented as strong and admirable people who play major roles in the live of the protagonist, such as Lady Macbeth in "Macbeth." In Hamlet, however, Ophelia becomes a very different role-she is conveyed as a lesser to the men around her. She is continually manipulated by her father, Polonius, her brother, Larertes and Hamlet, the supposed love of her life. Her sweet and innocent nature results in her becoming dependent on the man in her life to tell her how to behave. Hamlet shows a very different style in Shakespeare writing, no longer is the women controversially given respect by the male character, but is instead shown in a more traditional mere p**n for their fathers, brothers and lovers. ...read more.

Her brother too becomes set against her love for Hamlet, believing that she will ruin herself for Hamlet, yet he will never actually marry her, due to her lower social standing. During the actual play, Larertes is the only man who conveys to her that he actually cares for her, but we can see clearly that he believes her continuous open regard for Hamlet will reduce their family's nobility. He too adds to the pressure put on her to distance herself from Hamlet. Hamlets strategic plans towards Ophelia are probably the most conniving and vicious. He not only manipulates her constant love for him, but also toys with her emotions throughout, making her play exactly how he wants. He uses the courts knowledge of his relationship with Ophelia to get deeper involved in his plot to avenge his father and kill the king. He evolves Polonius' theory that Hamlet is mad with love for Ophelia. ...read more.

Finally, she kills herself finding no place in the situation for her own feelings. Hamlet is the least idealistic of Shakespeare's plays, with women being presented in a more realistic view, rather than an idealistic outlook on society where women have more control over their lives and aren't controlled by the men around them. Ophelia is presented in a more traditional feminine way, relying on men around her. This fits into Hamlet, and makes the play appear more legitimate, due to the emotion involved in the twisted love story. Still, I do not believe she is weak, but instead love struck and susceptible to manipulation by the men closely involved in her life. Many critics have argued that she is a dismal character, which no one can admire, but I see her as instead, a woman who is young, weak and naive to the world around her. ?? ?? ?? ?? Victoria McAdoo 13B ...read more.