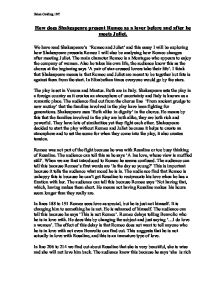 How does Shakespeare present Romeo as a lover before and after he meets Juliet.

How does Shakespeare present Romeo as a lover before and after he meets Juliet. We have read Shakespeare's 'Romeo and Juliet' and this essay I will be exploring how Shakespeare presents Romeo I will also be analysing how Romeo changes after meeting Juliet. The main character Romeo is a Montague who appears to enjoy the company of women. Also he takes his own life, the audience know this as the chorus at the beginning says 'A pair of star-crossed lovers take their life'. I think that Shakespeare means is that Romeo and Juliet are meant to be together but fate is against them from the start. In Elizabethan times everyone would go by the stars. The play is set in Verona and Mantua. Both are in Italy. Shakespeare sets the play in a foreign country as it creates an atmosphere of uncertainty and Italy is known as a romantic place. The audience find out from the chorus line 'From ancient grudge to new mutiny' that the families involved in the play have been fighting for generations. Shakespeare uses 'Both alike in dignity' in the chorus. He means by this that the families involved in the play are both alike, they are both rich and powerful. ...read more.

This suggests that he is puerile. Shakespeare prepares the audience for a tragedy by at the beginning of Act 1 Scene 2 Capulet promises Paris that in two years time Juliet can be his bride. The audience can tell this because Capulet says 'Let two more summers... her ripe to be a bride'. Also in this scene the audience find out about Juliet that she is 13 years old and her parents tell her what to do and who to marry. This shows that Capulet is protective of her. In Shakespearean times, it would be common that parents chose their daughter's husband. In Act 1 Scene 3 the audience learn about Juliet is that she has a low position as her mother tells her what to do. They do not have a close relationship, but Juliet does have a close relationship with the Nurse. At the end of this scene Juliet promises that she will at least met Paris, if she likes him she will marry him. Meanwhile Benvolio promises Romeo that if he comes to the ball Rosaline will be there, and there will be others more beautiful than Rosaline. They will appear like swans and Rosaline will appear like a crow compared to them. ...read more.

Her beauty is brighter than all light, it makes real light look artificial. The audience notice from Romeo's use of imagery now that he is in love with Juliet is that he is really genuine about loving Juliet. He is now more easier to understand, 'bright angel, for thou art as glorious to this night'. In the rest of the scene Romeo is fairly forceful and confident. An example of this is 'thy kinsmen are no stop to me... thou love me, let them find me here'. Meaning he will never leave her even if he was in danger himself, he would be caught, as if he could not have her he would be dead. This different from what he was before he met Juliet. Before he met Juliet he was shy and locked himself in his room and when he met Juliet he became confident and happy. This demonstrates a growing maturity. In the last speech in Act 2 Scene 2 Romeo is happy, the audience can tell this because he says 'Hence will I to my ghostly sire's cell, his help to carve, and my dear hap to tell'. He means he is off to tell Friar Lawrence and tell his of his happiness. In his speech he makes a reference to peace twice showing how peaceful he is. Helen Golding 10Y ...read more.