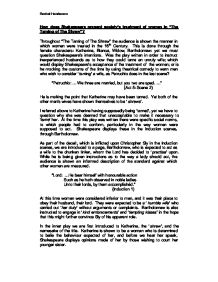 How does Shakespeare present society's treatment of women in &quot;The Taming of The Shrew&quot;?

How does Shakespeare present society's treatment of women in "The Taming of The Shrew"? Throughout "The Taming of The Shrew" the audience is shown the manner in which women were treated in the 16th Century. This is done through the female characters: Katherine, Bianca, Widow, Bartholomew: yet we must question Shakespeare's intentions. Was the play written in order to instruct inexperienced husbands as to how they could tame an unruly wife; which would display Shakespeare's acceptance of the treatment of the women; or is he mocking the customs of the time by using theatrical comedy to warn men who wish to consider 'taming' a wife, as Petruchio does in the last scene? "Petruchio: ... We three are married, but you two are sped. ..." (Act 5: Scene 2) He is making the point that Katherine may have been tamed. Yet both of the other men's wives have shown themselves to be 'shrews'. I referred above to Katherine having supposedly being 'tamed', yet we have to question why she was deemed that unacceptable to make it necessary to 'tame' her. At the time this play was written there were specific social norms, to which people had to conform, particularly in the way women were supposed to act. Shakespeare displays these in the Induction scenes, through Bartholomew. As part of the deceit, which is inflicted upon Christopher Sly in the Induction scenes, we are introduced to a page, Bartholomew, who is expected to act as a wife to the drunken tinker, whom the Lord has decided to 'practise' upon. ...read more.

Bianca on the other hand is mild, obedient and subservient as Bartholomew shows us is expected, this is compared with the outlandish behaviour of her sister. "Tranio: ... The one as famous for a scolding tongue As is the other for beauteous modesty." (1:2) This may be the cause of the number of suitors willing to court her, they find her attractive and she appears to fulfil all the criteria wanted and expected in a wife. Yet, Shakespeare shows us that this is not the case. "Bianca: ... Good master, take it not unkindly, pray, That I have been thus pleasant [teasing] with you both." (3:1) Bianca is displaying the shrewish side of her character, which until this point her father, and the audience were unaware of. She knows that she has many suitors, so she can afford to play them off against one another. Baptista only becomes aware of her 'shrewish' nature on the day of his elder daughter's wedding. "Baptista: ... And let Bianca take her sister's room." (3:2) This is more than just an instruction, it shows that Baptista has become aware that Bianca is likely to turn out like her elder sister; 'shrewlike' and despised. Shakespeare shows the most deceived character in the play to be correct by making this point. "Biondello: Sir, my mistress sends you word That she is busy, and she cannot come." (5:2) This is displayed upon her reaction to scolding from her husband; she states she has her own ideas about a woman's duty. ...read more.

While attending the 'Taming School', Petruchio's country house, Katherine is deprived of food and sleep as an animal may be. Shakespeare adds that she shall be allowed all of the things expected from a husband, and 'keeper' once she is 'tamed'. "Petruchio: When you are gentle you shall have one [a cap] too, And not till then." (4:3) She constantly defies him and continues with her wild ways, until we see her behaving mildly, obedient and subservient; exactly the expected norm displayed by Bartholomew. Shakespeare shows this during Katherine's last speech, at the wedding reception in Act 5. She states that women are 'bound to serve, love and obey', which would never have been spoken by her before. This speech is given at Petruchio's request, to inform the other women present of their newfound marriage duty. She may herself be using this opportunity to show onlookers the extent to which she has been 'tamed'. Possibly, however, the old, 'shrewd' Katherine is still showing through although she believes she will be refused food and sleep if she disobeys Petruchio, she may actually enjoy insulting her sister and the widow. I believe that Shakespeare was mocking the accepted treatment of women in the society in which he lived. We can see the way in which the stereotypical image of the sexes are portrayed throughout this play; most of the men are less that manly, and the female characters are shown to be very strong-willed. These features challenge the images conjured up in Katherine's last speech, making me believe that she was playing to her audience, and that 'Katherine the curst' still lurks below the surface. ...read more.