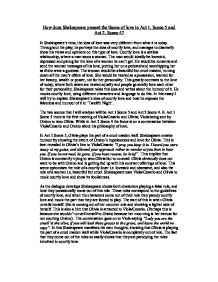 How does Shakespeare present the theme of love in Act 1, Scene 5 and Act 2, Scene 4?

How does Shakespeare present the theme of love in Act 1, Scene 5 and Act 2, Scene 4? In Shakespeare's time, the idea of love was very different from what it is today. Throughout the play, he portrays the idea of courtly love, and manages to discreetly show his views and opinions on this type of love. Courtly love is a sexless relationship, where a man woos a woman. The man would ideally be lovesick, depressed and pining for the love of a woman he can't get. He would be romantic and send the woman messages of his love, putting her on a pedestal and worshipping her as if she were a goddess. The woman would be a beautiful but cruel maiden, turning down all the man's offers of love. She would be treated as a possession, wanted for her beauty, wealth or power, not for her personality. This greatly contrasts to the love of today, where both sexes are treated equally and people generally love each other for their personality. Shakespeare takes this idea and writes about the humour of it. He mocks courtly love, using different characters and language to do this. In this essay I will try to explain Shakespeare's idea of courtly love and how he exposes the falseness and humour of it in 'Twelfth Night'. ...read more.

He left this ring behind him". But her real motive for doing this is that she has fallen in love with Viola/Cesario and wants to give her a ring as a sign of her love. She has now completely reversed in her role and become the courtly lover, trying to woo Viola/Cesario. Shakespeare uses this to ridicule courtly love and show that women can have desires too. He is saying that love should not follow a formula such as that of courtly love and that both sexes should have equal roles in love. Throughout Act 2 Scene 4 Shakespeare uses Orsino to show how hopeless and depressed a courtly lover is. He demonstrates how Orsino has grown obsessed with the morals of courtly love and how he has grown to love the idea of love more than love itself. The first example of Orsino's obsession with courtly love is when he says to Viola/Cesario "For such as I am, all true loves, unstaid and skittish in all motions else, save in the constant image of the creature that is beloved". In this passage Shakespeare shows how proud and narcissistic Orsino has become. He mocks the fact that Orsino has become so fixated on the suffering of love that he deludes himself into thinking that he is a model lover. ...read more.

This is the best example of dramatic irony so far, Orsino is oblivious of the fact that Viola is a woman and that she is talking about herself. Shakespeare uses this well to create tension among the audience. Shakespeare also managed to use Viola/Cesario's remarks to befittingly end the scene. In a way Viola has now become a courtly lover and this statement is employed by Shakespeare to show how different and diverse love can be. This echoes back on the whole play as well as this section. The general message that Shakespeare is trying to convey throughout is that there are no rules in love. He is saying that you should love someone for their personality and not for their wealth, land or power. He has managed to do this in a number of ways. Mainly the idea and mocking of courtly love and also the ideas placed by Viola/Cesario of how women can love too. Different characters are used well by Shakespeare and this is how he manages to convey his ideas on love so well. The role-changing also mocks the falseness of courtly love and it appears that Shakespeare is saying that both partners should be treated equally in love. ...read more.