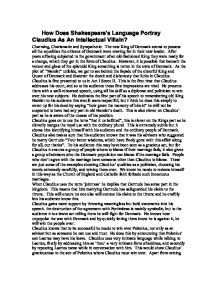 How Does Shakespeare's Language Portray Claudius As An Intellectual Villain?

How Does Shakespeare's Language Portray Claudius As An Intellectual Villain? Charming, Charismatic and Sympathetic. The new King of Denmark seems to possess all the equalities the citizens of Denmark were craving for in their new leader. After years of being subjected to the government of an old-fashioned King they were ready for a change, which they get in the form of Claudius. However, it is possible that beneath the veneer and gloss of the splendid King something is rotten in the state of Denmark. As the plot of "Hamlet" unfolds, we get to see behind the fa�ade of the cheerful King and Queen of Denmark and discover the deceit and dishonesty that lurks in Claudius. Claudius is first presented to us in Act I Scene II. This is the first time that Claudius addresses his court, and so to his audience these first impressions are vital. He presents them with a well-rehearsed speech, using all his skill as a diplomat and politician to win over his new subjects. He dedicates the first part of his speech to remembering old King Hamlet-to his audience this would seem respectful, but I think he does this simply to cover up for his deed-by saying "how green the memory of him is" he will not be suspected to have had any part in old Hamlet's death. ...read more.

This time Claudius uses two of Hamlet's close friends from university-Rosencrantz and Guildenstern. He explains to them how Hamlet is "So much from th'understanding of himself". Again, Claudius puts on a show as a "worried father figure" to bring them round despite the fact we know all of this is being done completely behind Hamlet's back. Claudius is aware of his power over these men, and uses it to his full advantage, how can they disobey the King and Queen? Claudius' real motive is simply to have two spies to make sure Hamlet causes no trouble for Claudius while he is away. Claudius doesn't mention or consider the consequences for Rosencrantz and Guildenstern if they do what they are asked. Claudius' continual use of Rosencrantz and Guildenstern, despite the suspicions among them that Hamlet knows they are spies, eventually leads to their death in Act 4 Scene 7 although their death is brought about by Hamlet, it was the fact that they were spying on him that caused him to die. Claudius' treatment of Polonius must next be examined. When Claudius finds out about Hamlets love of Ophelia, he knows he can use this to his full advantage. Indirectly, his use of Polonius leads to Polonius forcing his daughter into becoming a spy for the king, which Ophelia is reluctant to do. ...read more.

I believe the final scene rules out the argument that Claudius committed murder because of his love for Gertrude. In the final act Claudius has set up a poisoned drink for Hamlet after the dual. It is yet another deceitful plan that has catastrophic effects. When the plan goes wrong and Gertrude goes to drink the poison, if his love were true he would have stopped her immediately. But he knows of the effects for himself if he does this and so, selfishly, he makes no attempt to stop her. He doesn't even leave his seat; he just mutters, "It is the polish'd up. It is too late". Claudius' only redeeming qualities lie in the fact that he is a human being. Even when he prayed he wasn't desperate enough for mercy to give up the throne, he plotted murders to his dying day, and he lied continuously to his wife Gertrude. I believe he would have lived on quite happily if he hadn't been murdered at the end, indeed he was more worried about the consequences for himself if he had been found guilty of treason. Everyone Claudius befriended throughout the play died, each person somehow connected with Claudius. I think the only one person Claudius cared for was himself. He never once apologised or pleaded with Hamlet-even when he was dying. Claudius' only redeeming feature is that he is human. ...read more.