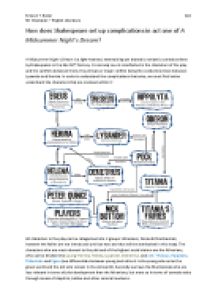 ﻿Simeon T. Baker 12A Mr Champion ? English Literature How does Shakespeare set up complications in act one of A Midsummer Night?s Dream? A Midsummer Night?s Dream is a light-hearted, entertaining yet dramatic romantic comedy written by Shakespeare in the late 16th Century. Its comedy soul is manifested in the characters of the play and the conflicts between them; the primary or major conflict being the condemned love between Lysander and Hermia. In order to understand the complications that arise, we must first better understand the characters that are involved within it: All characters in the play can be categorised into 3 groups: Athenians, Fairies & Mechanicals, however the fairies are not introduced until act two and thus will be overlooked in this essay. The characters who are most relevant to the plot and of the highest social stature are the Athenians, who can be divided into young: Hermia, Helena, Lysander, Demetrius, and old: Theseus, Hippolyta, Philostrate and Egeus (we differentiate between young and old as it is the young who enter the green world and the old who remain in the old world). ...read more.

This provides ample anachronistic value to the play which acts as a tool for both comedy and drama. Coincidently a 21st century audience would also scoff at the situation, but at Egeus instead of Hermia ? this can be attributed to the considerably more liberal societarian values we have today. Upon this Lysander retorts, saying: since Egeus loves Demetrius so much the two should get married ?You have her father?s love, Demetrius ? Let me have Hermia?s. Do you marry him?? - The first bawdy insult of many in the play; implying a h********l relationship between Egeus and Demetrius. In addition to this Lysander points out that Egeus? disdain is irrational as Lysander is equally if not more fit to be a son in law: ?I am, my lord, as well derived as he, as well possessed. My love is more than his; my fortunes every way as fairly ranked ? if not with vantage as Demetrius?? concluding with another amusing stab at Demetrius? integrity: ?Demetrius - I?ll avouch it to his head ? made love to Helena, and won her soul; and she, sweet lady, dotes... ...read more.

I believe Shakespeare does this in a rather hurried manner but only to aid the progression of the play from the old world because he understands that humour must be minimal until the green world is reached, otherwise the plot structure must become more complex and the play becomes less identifiable as a comedy which would result in it losing its light-hearted feel and could even end up boring the audience. In the second scene we are introduced to the mechanicals who are planning to put on a play, ?Pyramus and Thisbe? ? a well recognised Roman tragedy, in anticipation of Theseus? and Hippolyta?s wedding. In Shakespeare?s day the actors portraying these characters would have been dressed as clowns and it is easy to identify how this reflects in their ineptitude and the humorous traits in their character. The sub-plot that the mechanicals follow runs parallel with the main complication and their appearance in act one, I believe, serves only to advance the play into the green world, allowing the veracious comedy and entertainment to fully bloom as this is where the chaos, conflict resolution and supernatural are able to occur ...read more.