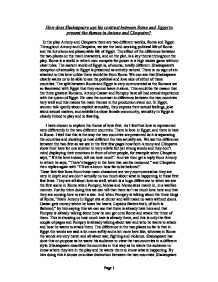 How does Shakespeare use his contrast between Rome and Egypt to present the themes in Antony and Cleopatra ?

How does Shakespeare use his contrast between Rome and Egypt to present the themes in Antony and Cleopatra? In the play Antony and Cleopatra there are two different worlds, Rome and Egypt. Throughout Antony and Cleopatra, we see the hard-working political life of Rome and the luxurious and pleasurable life of Egypt. The effect of the difference between the two places on the main characters, and on the plot, is a key theme throughout the play. Rome is a world in which men compete for power in a high stakes game without clear rules. The eastern world of Egypt is, of course, totally different. Shakespeare's deception of sexuality in Egypt is presented as entirely natural. There is no sign of sin attached to this love unlike there would be from Rome. We can see that Shakespeare clearly wants us to be able to see the political and love side of either of these countries. The split between Rome and Egypt is very controversial as the Romans are so fascinated with Egypt that they cannot leave it alone. ...read more.

Just by them doing this we can tell that there isn't as much love here and that they are coming here to start a war. And when Pompey is talking about the three kings of Rome, "Mark Antony In Egypt sits at dinner and will make no wars without doors. Caesar gets money where he loses his hearts. Lepidus flatters both, of both is flattered;" by him saying this we can see that there is already hate here and that Pompey is already talking about how he can get onto Rome and attack the three of them. This is showing us how much hate is already there, and this is only the first couple of pages and Pompey is already talking about war and who he wants to attack and how he wants to attack them. The difference in the two places so far is that in Egypt the words are said a lot more softly and a lot more love like, whereas in Rome the words are very harsh and all about war, fighting and violence. ...read more.

Another key theme that I have picked out in the production is that of Sadness, grief and bereavement. These play a big part in the contrast that Shakespeare uses to separate Rome and Egypt. In Rome Grief and bereavement is shown a lot more harsh, and it is like serious situations don't matter as much as they do in Egypt. For example Death is seen as very serious and there is a huge dramatic few scenes on both Antony and Cleopatra's deaths, we can tell this as when Antony dies Cleopatra says "The crown o'the' earth doth melt. My lord!" here we can tell that she is talking about Antony and she is saying that because he is dying it means that the earth may as well melt, and she then lets out a cry for her lord. We see the how Egypt is a lot more emotional when Cleopatra starts to faint and says " Beneath the visiting moon" here she is pretending to be dying because deep down she really wants to die because the love of her life has just passed away. ?? ?? ?? ?? Page 1 ...read more.