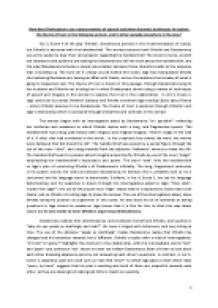 How does Shakespeare use representations of speech and other dramatic techniques to explore the theme of trust in the following extract, and in other episode elsewhere in &quot;Othello&quot;?

﻿How does Shakespeare use representations of speech and other dramatic techniques to explore the theme of trust in the following extract, and in other episode elsewhere in the play? Act 3, Scene 4 of the play ?Othello?, Desdemona persists in the recommendation of Cassio, but Othello is obsessed with the handkerchief. This extract concerns both Othello and Desdemona; we as the audience hear their conversation regarding the handkerchief. The mood is tense, as both the characters and audience are waiting for Desdemona to tell the truth about the handkerchief, and the way Shakespeare includes a casual conversation between these characters adds to the suspense that is building up. The tone set it uneasy as just before this scene, Iago has manipulated Othello into believing Desdemona is having an affair with Cassio, and so the audience feel uneasy of what is going to happened next. The theme of trust is shown in this passage, through Desdemona lying to her husband and Othello not trusting her in which Shakespeare shows using a variety of techniques of speech and imagery in this extract to explore the trust in the relationships. ...read more.

Othello's behaviour, and Desdemona's sudden distrust of it, foreshadows Othello's violent rage. In this passage, the audience see Desdemona?s first lie - ?it is not lost?, then repeated ?I say, it is not lost.? This portrays the unfaithful relationship between the married couple, and so Othello asks her to ?fetch?t: let me see?t.?. The dynamic verb ?fetch? is used twice implying that he does not trust Desdemona and believes that the handkerchief is with Cassio. The imperative ?fetch me the handkerchief? shows his position and status over her. On the other hand, Othello?s position is appeared a weaker in Act 4, Scene 1, though he does use an imperative: ?get me some poison, Iago, this night?, specifically asking Iago. The imperative show the trust in the relationship, and his anger is shown through the harsh verb ?get?. Furthermore, in Act 4, Scene 1, Othello puts all his attention on Desdemona but has mixed opinions about her: ?ay, let her rot, and perish, and be damned tonight, for she shall not live.? The aggressive verbs ?rot? and ?perish? highlights that Iago has succeeded in getting Othello to focus on Desdemona alone and to rearticulate his desire for her ruin, despite his continued positive thoughts towards ?a fine woman, a fair woman, a sweet woman?. ...read more.

When Emilia tries to suggest for a second time that jealousy is the culprit ?Is not this man jealous??, Desdemona claims ignorance: ?I nev'r saw this before. Sure, there's some wonder in this handkerchief: I am most unhappy in the loss of it.? Emilia sets the agenda setting of jealousy, and Desdemona blocks the question by answering she is ?most unhappy?. The superlative ?most?, followed by the adjective ?unhappy? reinforces her innocence and does not know why Othello is different towards her. The extract from Act 3, Scene 4 and Act 4, Scene 1 both portray the trust towards the relationships of each of the characters to the audience, and the speech and dramatic devices that Shakespeare uses helps him to get them across to the audience without the other characters picking up on what he is implying. Othello?s conveyance of his feelings to the audience creates dramatic irony, as we know that he would never act on his feelings, but Iago twists it and convinces Othello that Cassio and Desdemona are having an affair, when we know that Desdemona is innocent and does not deserve this. ...read more.