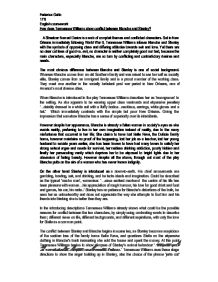 How does Tennessee Williams show conflict between Blanche and Stanley?

How does Tennessee Williams show conflict between Blanche and Stanley? A Streetcar Named Desire is a web of complex themes and conflicted characters. Set in New Orleans immediately following World War II, Tennessee Williams infuses Blanche and Stanley with the symbols of opposing class and differing attitudes towards s*x and love. Yet there are no clear cut lines of good vs. evil, no character is neither completely good nor bad, because the main characters, especially Blanche, are so torn by conflicting and contradictory desires and needs. The most obvious difference between Blanche and Stanley is one of social background. Whereas Blanche comes from an old Southern family and was raised to see her self as socially elite, Stanley comes from an immigrant family and is a proud member of the working class. They meet one another in the socially turbulent post war period in New Orleans, one of America's most diverse cities. When Blanche is introduced to the play Tennessee Williams describes her as 'incongruous' to the setting. As she appears to be wearing upper class vestments and expensive jewellery '...daintily dressed in a white suit with a fluffy bodice...necklace, earrings, white gloves and a hat.' Which immediately contrasts with the simple but poor New Orleans. Giving the impression that somehow Blanche has a sense of superiority over its inhabitants. ...read more.

Tennessee Williams decides once again to use Stanley's aggression to show a build up of tension between the two characters. The word 'slams' can be referred as an onomatopoeia for a loud intimidating noise, to show how he is making Blanche feel uncomfortable. More tension is built up as Stanley questions Blanche on papers regarding Belle Reve, and she replies by playing dumb and answering with deceiving answers. 'What papers...There were some papers...they probably are somewhere' The uncertainty in her answers show that in somehow she is trying to discreetly provoke his patience. She successes, and as she reveals some papers from her trunk, he immediately snatches them from her hands. This mutual provocation between the characters shows the conflict of interests between the two. Tension is finally released as Stella enters the scene and Blanche is in some way saved. In scene three the conflict continues between Stanley and Blanche. The men are sitting round the table playing poker, as Blanche enters the room she insinuatingly says 'Please don't get up' to make the men feel rude and herself superior. However Stanley comes back to her equally insolently 'Nobody's going to get up, so don't be worried.' Tennessee Williams uses sarcasm very often in their conversations by this point in the play, that at this point Blanche and Stanley are practically incapable of being in the same room harmoniously. ...read more.

Her fall into madness can be read as the ending brought about by her dual flaws-her inability to act appropriately on her desire and her desperate fear of human mortality. s*x and death are intricately and fatally linked in Blanche's experience. As When Stanley rapes her, he removes the last grains of dignity remained in Stella, and finally gains full power and control. This scene is some how in contrast with the first time Blanche and Stanley met. In the begging it was Blanche provoking and flirting with Stanley. However by this point Blanche has lost all her confidence and has developed fear towards Stanley. In the beginning she flirtatiously asked him to button up her dress whilst know she shouts at him to get out. Stanley's action of r****g Blanche and showing no remorse, shows he is the triumph of the conflict, he achieves what he wants by winning over Blanche, and manages to make her leave his home, as he desired however in the most brutal of ways. Blanche is deceivingly lead to a mental instate by a doctor who comes to receive her at Stella's and Stanley's home. The play ends with an image of Stanley as the ideal family man, comforting his wife as she holds their newborn child. The wrongfulness of this representation, given what we have learned about him in the play, ironically calls into question society's decision to ostracize Blanche. Federica Gallo 11'6 English coursework ...read more.