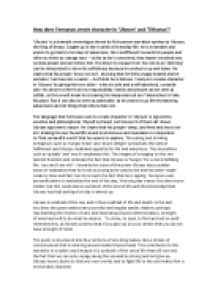 ﻿How does Tennyson create character in ?Ulysses? and ?Tithonus?? ?Ulysses? is a dramatic monologue shown by first person narration spoken by Ulysses, the King of Ithaca. Caught up in the routine of everyday life, he is miserable and yearns to go back to his days of adventure. He is indifferent towards his people and refers to them as ?savage race? ? as far as he?s concerned, they haven?t evolved into normal people and are below him. His desire to escape from his role as an ?idle King? can be interpreted to show his selfishness because he wishes to up and leave. He claims that his people ?know not me?, showing that he feels unappreciated and he exclaims ?I am become a name? ? he thinks he is famous. Tennyson creates character in ?Ulysses? by giving him two sides ? a heroic side and a self-absorbed, cowardly side. His desire to flee from his responsibility, family and people can be seen as selfish, as this would mean he is leaving his inexperienced son Telemachus to take his place. ...read more.

?To strive, to seek, to find and not to yield? reiterates this, as Ulysses conveys that if you give up on your dream that you do not have strength of mind. The poem is structured into four sections of one long stanza, like a stream of consciousness that is whirring around inside Ulysses head. This contributes to the narrative in a subtle way because it is symbolic of the sea of life that will not end, the fact that we can only voyage along the sea and be strong and not give up. Ulysses heroic desire to discover new worlds and to fight life to the end makes him a memorable character. ?Tithonus? is similar to ?Ulysses? because it is also a dramatic monologue. A single character whose words reveal his identity speaks the entire text. The lines of the poem take the form of blank verse (unrhymed iambic pentameter). As a whole, the poem falls into seven paragraph-like sections of varying length, each of which forms a thematic unit unto itself. ...read more.

Tithonus uses imagery as he recalls those days of youth when he ?felt my blood/glow with the glow that slowly crimson?d all?, experienced ?kisses balmier than half opening buds/Of April?, and Aurora?s ?rosy shadows bathed? him. At once he wishes to be one of those ?happy men with the power to die? . The basic human convention of death has even been taken away from him, he has no control over his fate. He asks Aurora to release him and let him die so that he could forget the emptiness of his days of long life. Tennyson creates character in Tithonus by creating sympathy for the speaker from the audience but at the same time, displaying Tithonus?s power-hungry side that resulted in his horrific incapacity to die and age forever. Tennyson uses this as a warning to the audience that the ?race of man? is sufficient just as it is ? this poem displays Tennyson?s patriotism and faith in human kind and that any stray or selfish act could result in disaster. ...read more.