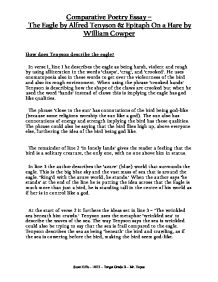 How does Tenyson describe the eagle?

How does Tenyson describe the eagle? In verse 1, line 1 he describes the eagle as being harsh, violent and rough by using alliteration in the words 'clasps', 'crag', and 'crooked'. He uses onomatopoeia also in these words to get over the violentness of the bird and also its rough environment. When using the phrase 'crooked hands' Tenyson is describing how the shape of the claws are crooked but when he used the word 'hands' instead of claws this is implying the eagle has god like qualities. The phrase 'close to the sun' has connotations of the bird being god-like (because some religions worship the sun like a god). The sun also has connotations of energy and strength implying the bird has these qualities. The phrase could also be saying that the bird flies high up, above everyone else, furthering the idea of the bird being god like. The remainder of line 2 'in lonely lands' gives the reader a feeling that the bird is a solitary creature, the only one, with no one above him in status. ...read more.

In the last line of the poem Tenyson says 'And like a thunderbolt he falls' This is saying how the eagle can fall effortlessly like a thunderbolt, which shows how much power the eagle holds. What did Cowper think of Tiney? Cowper is obviously very fond of his pet hare, Tiney. He is very protective over it; this is shown in verse 1 of the poem - "Here lies, whom hound did n'er pursue, Nor swifter greyhound follow, Whose got ne'er tainted morning dew, Nor ear heard huntsman's 'hallo' " Cowper is saying that his hare has never been let into danger, and his feet have never even touched the 'morning dew'. This shows that Cowper cares for Tiney and will not let him come to any harm. In the second verse Cowper describes how he raised the hare like one of his children, but even though Cowper was trying to raise the hare like he was the hare still had a wild streak in him. "Old Tiney, surliest of his kind, Who, nursed with tender care, And domestic bounds confined, Was still a wild jack-hare" Cowper must have great love for the rabbit as he treats it like one of his own, letting it jump around the house. ...read more.

Cowper is very observant of Tiney's habits; he notices lots of little details. He notices how Tiney goes to sleep for most of the day and comes alive at night - "Dozing out all his noons/and ev'ry night at play. Remembering Tiney's habits like this shows that Cowper had time for the Hare. Cowper said he kept Tiney because the hare amused him - "I kept him for humours sake, For he would oft beguile, My heart of thoughts made it ache, And force me to smile" This is saying, even on the days when Cowper was sad; Tiney would force a smile to his face. In the last couple eof verses Cowper talks about the death of Tiny, but he still looks on the positive side of things. - "But now beneath the walnut shade He finds his long, last home, And waits in snug concealment laid, Till gentler puss shall come." This verse is describing where Tiney is buried, under a walnut tree. Cowper looks on the bright side by saying Puss, his cat, will die soon, and it will keep Tiney company when he dies. Comparative Poetry Essay - The Eagle by Alfred Tenyson & Epitaph On a Hare by William Cowper Scott Iliffe - 10H3 - Target Grade B - Mr. Hayes ...read more.