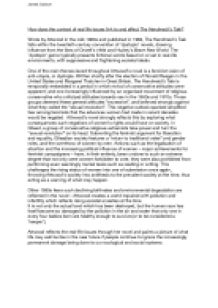 How does the context of real life issues link to and affect 'The Handmaid's Tale'?

﻿James Clyburn How does the context of real life issues link to and affect The Handmaid?s Tale? Wrote by Attwood in the mid-1980s and published in 1986, The Handmaid?s Tale falls within the twentieth century convention of ?dystopic? novels, drawing influence from the likes of Orwell?s 1984 and Huxley?s Brave New World. The ?dystopic? genre typically presents fictional words based on or set in real-life environments, with suppressive and frightening societal ideals. One of the main themes laced throughout Attwood?s novel is a feminist vision of anti-utopia, or dystopia. ...read more.

This negative outlook sparked amplified fear among feminists that the advances women had made in recent decades would be negated. Attwood?s novel strongly reflects this by exploring what consequences such negations of women?s rights would have on society. In Gilead, a group of conservative religious extremists take power and turn the ?s****l revolution? on its head. Subverting the feminist argument for liberation and equality, Gileadian society features a ?return to traditional vales? and gender roles, and the overthrow of women by men. Actions such as the legalization of abortion and the increasing political influence of women ? major achievements for feminist campaigners ? have, in their ...read more.

Other 1980s fears such declining birthrates and environmental degradation are reflected in the novel ? Attwood creates a world impaired with pollution and infertility which reflects rising societal anxieties at the time. It is not only the actual land which has been destroyed, but the human race has itself become so damaged by the pollution in the air and water that only one in every four babies born are healthy enough to survive (or to be considered a ?keeper?). Attwood reflects the real-life issues through her novel and paints a picture of what life may well be like in the near future if people continue to ignore the increasingly permanent damage being done to our ecological and social systems. ...read more.