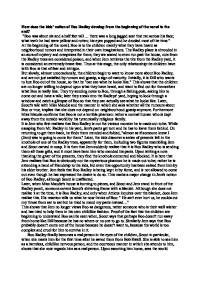 How does the kids' notion of Boo Radley develop from the beginning of the novel to the end? "Boo was about six and a half feet tall ... there was a long jagged scar that ran across his face; what teeth he had were yellow and rotten; his eyes popped and he drooled most of the time." At the beginning of the novel, Boo is to the children mainly what they have heard as neighborhood rumors and interpreted in their own imaginations. The Radley place is shrouded in an aura of mystery and creepiness for them; they are scared to even run past the house, nuts from the Radley trees are considered poison, and when Jem retrieves the tire from the Radley yard, it is considered an extremely brave feat. Thus at this stage, the only relationship the children have with Boo is that of fear and intrigue. But slowly, almost unconsciously, the children begin to want to know more about Boo Radley, and are not just satisfied by rumors and gossip, a sign of maturity. ...read more.

On returning to get them back, he finds them mended and folded, "almost as if someone knew I (Jem) was to going to come for them." Later, the kids discover a series of presents left in the knothole of one of the Radley trees, apparently for them, including two figures resembling Jem and Scout carved in soap. It is then that Jem suddenly realize that it is Boo Radley who is sending them all these gifts, and it must have been him who mended his pants. Upon writing a note thanking the giver of the presents, they find the knothole cemented and blocked. It is here that Jem realizes that Boo is obviously not the mysterious phantom he is made out to be; rather he is extending a hand of friendship to the kids, but even this opportunity has been seized from him by his elder brother. Jem feels that Boo Radley is being kept in by force, and is not allowed to come out even though he has expressed the desire to do so. ...read more.

Boo Radley finally becomes a real person in the eyes of the children, Scout in particular, when she meets him for the first time after he saved them from Bob Ewell. She is able to see him as a harmless, childlike nervous person, and the courteous manner in which she attends to him, shows that she now regards him as a real person. Upon escorting him home, sees the world through his eyes, and realizes that Boo Radley has been living the life denied to him through the children. Thus finally Boo Radley becomes a real person, completing his progression from monster to human. The children's changing attitude towards Boo Radley is an important way of gauging their development from innocence to an adult outlook on life. Initially, in all their childhood innocence, they believed street gossip, but as they began maturing, they wanted to find out for themselves what was true. Scout's ability to look from Boo Radley's viewpoint is the ultimate point of her growing up, as she is able to understand what Boo is really all about. ...read more.