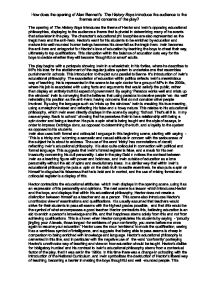 How does the opening of Alan Bennetts The History Boys introduce the audience to the themes and concerns of the play?

The opening of The History Boys introduces the theme of Hector and Irwin's opposing educational philosophies, displaying to the audience a theme that is pivotal in determining many of he events that arise later in the play. The character's educational philosophies are also represented as the tragic hero and the anti-hero. Hector's want for his students to be enriched by education and mature into well-rounded human beings becomes his downfall as the tragic hero. Irwin becomes the anti-hero and antagonist for Hector's love of education by teaching the boys to cheat their way, ultimately to top qualifications. This disruption within the balance of education sets way for the boys to decide whether they will become 'thoughtful or smart' adults. The play begins with a prolepsis showing Irwin in a wheelchair, in his forties, where he describes to MPs his idea for the abolishment of the regular justice system to undertake one that resembles punishment in schools. This introduction to the plot runs parallel to Bennett's introduction of Irwin's educational philosophy. The association of education within politics reflects Irwin's meretricious way of teaching. ...read more.

In a similar way that within Irwin's educational philosophy he puts a spin on the drab truth to excite examiners, he also puts a spin on himself to disguise his falseness that he is bold and in control, and the use of mixing formal and colloquial register is a display of this. Hector contradicts the educational attributes which Irwin displays in the opening scene, using it as an expression of his personality and opinions. The next scene is a lesson which introduces Hector and the boys, and displays that within his educational philosophy, Hector does not create a distinction between himself as a teacher and as a person. This scene also introduces Hector's unorthodox view of examinations and qualifications. It is usually assumed that teachers would strive for their students to pass all exams with the highest grades possible, and that this would be the symbol of what encompasses a good teacher. Hector contradicts this, believing education is an aid to enrich a person's knowledge and life, and that happiness stems solely from this and not from achieving qualifications. This is shown when Hector congratulates his students by saying - 'proudly jingling your A levels, those longed-for emblems of your conformity, you come before me once again to resume your education.' ...read more.

The opening of the play further introduces educational philosophy when Hector expresses his passion that the boys should try for 'less lustrous institutions' than Oxbridge. The use of the word 'lustrous' is overdramatic and sarcastic, which shows that once again Hector finds the need to expose that the qualifications, exams and top universities are only thought to be an achievement of happiness by stereotype, and he is mocking this belief, that even the boys share and display to him. The use of the word 'institutions' suggests confinement, and a lack of emotion - which further supports that Hector believes that Oxbridge do not necessarily bring happiness or enrichment to your life, but instead are places to imprison your expression of emotion. The opening of the play not only introduces Hector and Irwin's educational philosophies, but exposes the contrasts of the two. Irwin encourages the boys smartness, creating a spin to achieve his only perception of an enriched life: qualifications and top universities. Hector encourages the boys thoughtfulness, using his own life experience to create interesting, and often irrelevant lessons. These philosophies of education will become the pivotal themes in the unfolding events in the rest of The History Boys. How does the opening of Alan Bennett's The History Boys introduce the audience to the themes and concerns of the play? ...read more.