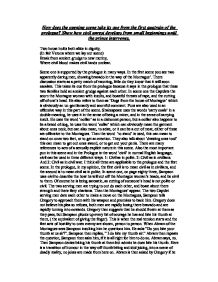 How does the opening scene take its cue from the first quatrain of the prologue? Show how civil unrest develops from small beginnings until the prince intervenes.

How does the opening scene take its cue from the first quatrain of the prologue? Show how civil unrest develops from small beginnings until the prince intervenes. Two house holds both alike in dignity, (In fair Verona where we lay our scene) Break from ancient grudge to new mutiny, Where civil blood makes civil hands unclean. Scene one is supported by the prologue in many ways. In the first scene you see two apparently daring men, showing bravado in the way of the Montague'. There discussion starts as a petty match of vaunting, little do they know that it will soon escalate. This takes its cue from the prologue because it says in the prologue that these two families hold an ancient grudge against each other. In scene one the Capulets the scorn the Montague woman with insults, and boastful threats of rape, and the cutting off of one's head. He also refers to them as 'Dogs from the house of Montague' which is obviously an un-gentlemanly and scornful comment. Puns are also used in an offensive way in this part of the scene. Shakespeare uses the words 'carry coals' in a double meaning, he uses it in the sense of being a miner, and in the sense of carrying insult. ...read more.

Sampson then agrees and says, "Well sir". It appears the argument has died down, and now we know that the Capulets display of fanforade, was false, and that the last thing they wanted was a fight as they were just cowards with big egos and bigger mouths. However the argument soon escalates when, an aristocrat of the house of Montague called Benvolio appears. Good hearted as he is he still is the one who is the catalyst in the reaction that follows. Seeing one of their own house approaching and a respected one who is higher up the social ladder at that, Gregory feels the need to urge Sampson to say better to the last comment. Here is a great use of the stop go affect, the will they fight/wont they fight, keeps you on your toes, and asking for more.. Even after Benvolio's entrance, which spurs more idle words, Gregory still can not bring himself to say the comment. However Sampson can, and Abram takes much offensive to this. He accuses Sampson of lying, and Sampson then threatens him to draw his sword, and fight like a man. Abram feeling he needs to support his lineage, draws his sword and they fight. Benvolio begs them to part with their swords for they no not what they do, but before any reaction has been observed, Tybalt appears, an aristocrat from the house of Montague, known for his fiery character, and his legendary sword fighting. ...read more.

The Prince then tells them that they are disturbing the peace, to such a point where old civilians are having to use their own ancient weapons, to try to keep the peace. he tells the families that these civilians are diseased with peace, in order to stop the families diseased hatred. The Prince then draws a threat to the situation, he tells them that if they ever disturb the streets again, they will face the punishment. he then tells all to leave, and tells Capulet to come with him, and Montague to go along in the afternoon. Montague then talks to Benvolio and asks for an explanation of what happened. Benvolio tells him that he saw the servants of his enemy and his own servants, fighting as he approached. He tells of how he try's to part them, and explains how the 'fiery Tybalt' drew his sword and challenged him. He tells of when they were fighting that more and more people came and joined in for either side, until the Prince came and broke it up. I think this scene is trying to get across the meanings of the word civil. How people with such a high social standing, can fight and do such terrible things. No matter of what rank, this does not stop you starting fights, and behaving so un-civily, but perhaps only gives you more power to inflict your discourteous behaviour with. ...read more.