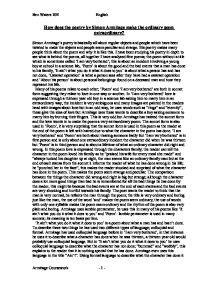 How does the poetry by Simon Armitage make the ordinary seem extraordinary?

How does the poetry by Simon Armitage make the ordinary seem extraordinary? Simon Armitage's poetry is basically all about regular objects and people which have been twisted to make the objects and people seem peculiar and strange. His poetry makes many people think about the poem and why it is like this. I have been studying his poetry in depth to see what is behind the poems, all together I have analysed five poems; the poem without a title which is sometimes called 'I am very bothered'; this is about an incident involving a young boy at school in a science lab, 'Poem' is about the good and the bad events that a man has done to his family, 'It ain't what you do it what it does to you' is about what a person has and has not done, 'Cataract operation' is what a person sees after they have had a cataract operation and 'About his person' is about personal belongings found on a deceased man and how they represent his life. Many of his poems relate to each other; 'Poem' and 'I am very bothered' are both in sonnet form suggesting they relate to love in one way or another. ...read more.

There is also some enjambment in the middle of the poem describing something the character has done, "skimmed flat stones across black moss", the enjambment gave the affect of the stones leaping like they do on black moss. The alliteration of the 's' does this also by using the 's' every two syllables. Alliteration is also used in 'I am very bothered' in this circumstance Armitage uses alliteration to describe a burning sensation by using a 'b' sound "Bunsen burner/branded/burning". Some of the last stanzas in Armitage poems refer back to the title; in 'It ain't what you do it what it does to you' the last line of the poem is "That feeling I mean", not only is at a line which makes the reader refer back to the title it is also a type of question. It is asking the reader if they know what the character is talking about. Armitage also does this in 'Poem'; "Sometimes he did this, sometimes he did that." Armitage characteristically refuses to judge the man leaving the reader with a question. The last line refers back to the title in a poem called 'Cataract operation', the last line is "I drop the blind but not before a company of half dozen hens struts through the gate, looks around the courtyard for a ...read more.