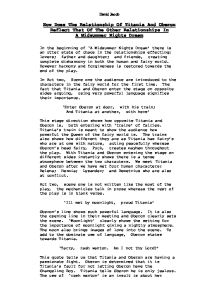 How Does The Relationship Of Titania And Oberon Reflect That Of The Other Relationships In A Midsummer Nights Dream?

How Does The Relationship Of Titania And Oberon Reflect That Of The Other Relationships In A Midsummer Nights Dream In the beginning of 'A Midsummer Nights Dream' there is an utter state of chaos in the relationships effecting: lovers; father and daughter; and friends, creating complete disharmony in both the human and fairy world. However harmony and forgiveness is restored towards the end of the play. In Act two, Scene one the audience are introduced to the characters in the fairy world for the first time. The fact that Titania and Oberon enter the stage on opposite sides arguing, using very powerful language signifies their importance. 'Enter Oberon at door, with his train; And Titania at another, with hers' This stage direction shows how opposite Titania and Oberon is, both entering with 'trains' of fairies. Titania's train is meant to show the audience how powerful the Queen of the fairy world is. The trains also shows how different they are as Titania has fairy's who are at one with nature, acting peacefully whereas Oberon's head fairy, Puck, creates mayhem throughout the play. With Titania and Oberon entering the stage on different sides instantly shows there is a tense atmosphere between the two characters. We meet Titania and Oberon after we have met four human characters: Helena; Hermia; Lysander; and Demetrius who are also at conflict. Act two, scene one is not written like the most of the play, the mechanicles talk in prose whereas the rest of the play is in blank verse. ...read more.

This quote is from Demetrius's speech. Demetrius is jealous of Lysander as Demetrius loves Hermia but Hermia is in love with Lysander. This quote explains how Demetrius thinks Lysander should let Hermia go as he treats her as a possession. Demetrius also thinks Hermia should love him as an alternative. It is clear to Demetrius that Lysander treats her a possession. He asks Lysander to 'yeild' Hermia as Demetrius's love for Hermia and thinks his love should be his 'right'. More jealousy is occurs in the play from Helena towards Hermia. 'None but your beauty; would that fault were mine' Helena is jealous of Hermia as Demetrius loves Hermia and not her. This quote from Helena's speech is describing how she is jealous of Hermia's 'beauty' and desires she was beautiful so Demetrius will love her not Hermia. Titania shows stubbornness as she refuses to give up the changeling boy to Oberon. 'And for her sake do I rear up her boy And for her sake I will not part with him' This quote shows exactly how stubborn Titania is, she refuses to relent. The stubbornness of Titania also reflects on Hermia as Hermia, a shy innocent girl stands up to her father, Egeus and Theseus the king of Athens. Egeus and Theseus are both very powerful men in Athens as like Oberon is in the fairy world. Hermia stands up to Egeus and Theseus as they both want Hermia to marry Lysander but Hermia shows her spirit and refuses to marry Lysander '...I refuse to wed Demetrius' (1:1:64) ...read more.

After Oberon has Titania he sends puck to reverse the love spell on Lysander. Lysander no longer loves Helena, he then falls back in love with Hermia. Doing so peace and happiness is restored. 'Here come the lovers, full of joy and mirth?' This quote explains to the audience that the lovers are reunited. Lysander is back loving Hermia but Demetrius still loves Helena so the lovers became couples. Egeus is angry about the lovers and still demands Hermia to marry Demetrius. 'I beg the law, the law, upon his head.' Egeus wants Lysander to be punished for running away with his daughter. However Theseus intervenes and over rules Egeus' complaint as he can see how in love the couples are. Knowing how happy the lovers are and how well Theseus' relationship is going with Hippolota, Theseus decides not to only deny Egeus request to punish Lysander but suggests a triple wedding. Theseus suggests that himself and Hippolota will get wed with; Helena and Demetrius; Hermia and Lysander. Theseus thinks having a triple wedding will please the people of Athens. Through utter chaos Theseus and Hippolota get wed even though Theseus conckered Hippolota in war. This shows that the Queen of Amazons and Theseus the King of Athens can see love through conflict, showing love defeats conflict. The two worlds are parallel, Oberon and Theseus, both Kings show how powerful their Characters are as they restore peace to both worlds. All the relationships and emotions are based once again on the relationship of Titania and Oberon. Inevitably, when Titania and Oberon's conflict was resolved, the harm was restored. David Jacob ...read more.